Ken Dodd schedules an early evening twilight showing at Whitley Bay!
The Ken Dodd Happiness Show
Whitley Bay Playhouse
Saturday 8th & Sunday 9th August 2015
The PLAYHOUSE is thrilled to inform you that comedy veteran Ken Dodd, will be returning to the coastal region, in August this year. Ken joins us for two pun filled dates and catering for all guests, we’ve even scheduled a special 5 pmshow on Sunday evening, for those who might fancy an early night. 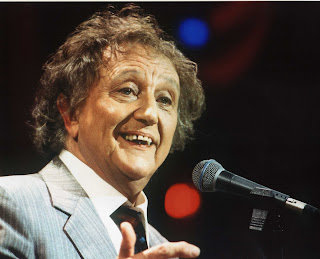 Ken Dodd's hugely successful career as a professional entertainer spans over 60 years. He is a comedian of unrivalled legendary status; an icon and a national treasure who has been entertaining audiences for a lifetime of happiness and laughter. Last year, the multi-award winning star celebrated his 60th anniversary year as a professional entertainer.
Don't miss his fun-filled Happiness Show for all the family, with non-stop gags and a selection of songs presented in Ken's unique and varied style: Everything from ballads to grand opera!  Come and enjoy his famous ‘Happiness Show’ and you’ll be absolutely discumknockerated (that’s Knotty Ash for ‘over the moon’) by a truly tattifelarius (fun-filled) evening of laughter and songs.
“Entertaining gives me a true feeling of plumptiousness. I’m fizzing like a bottle of champagne with the cork out! Discovering I could make people laugh was like being kissed by an angel”.  Ken’s love of showbiz began when he saw an advert for a ventriloquist’s doll in a local paper. His parents bought it for him and he christened it ‘Charlie Brown’. He worked on a semi-professional basis for many years to supplement his earnings as a salesman ‘on the knocker’ in Liverpool
“He is a comedy genius who is so funny that he should be available on the NHS. He’s a Chippendale in a room full of MFI.” – Eric Sykes
With two Happiness shows programmed, there really is no excuse to miss this one of a kind performer!
Tickets:
The Ken Dodd Happiness Show appears at the Whitley Bay Playhouse on Saturday 8th at 7pm & Sunday 9th August at 5pm. Tickets on sale now are priced at £21, £20 conc.
Tickets are available from the Box Office open Monday – Friday 10am – 4pm, Saturday 10.30am -2.30pm plus until show start on event days. Tickets can also be purchased on the booking hotline 0844 248 1588 or online at www.playhousewhitleybay.co.uk.
Posted by North East Theatre Guide at 14:51