Magna Carta through Opera
The Great Charter
DurhamCathedral - Saturday 13 June
MiddlesbroughCathedral - Saturday 20 June
Young people from across County Durham will join with local singers and professional musicians in a celebration through words and song of the 800th anniversary of Magna Carta. 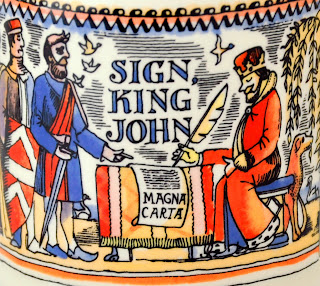 The Magna Carta was a peace-making document drafted by the Archbishop of Canterbury to settle unrest between King John and a group of rebel barons. Issued on 15 June 1215 at Runnymede near Windsor, it promised the protection of church rights, protection for the barons from illegal imprisonment, access to swift justice, and limitations on feudal payments to the Crown. The Magna Carta subsequently formed the basis of the American and French revolutions, shaped the constitutions of postcolonial nations, and inspired the configuration of the 1948 Universal Declaration of Human Rights and is now the theme of a brand new community opera, which will be performed in the majestic spaces of both Durham and Middlesbrough cathedrals.
The main themes of equality before the law, democracy, and freedom have been woven together by composer Timothy Craig Harrison and librettist Paul Hodgson, to create The Great Charter, an opera spread across two periods in time: that of King John and a futuristic period.
Librettist Paul Hodgson explained: “Any tale of oppression and injustice remains relevant for all time and Timothy and I felt that a double narrative would increase the immediacy of the issues being put on stage. The Great Charter, is not just about the Magna Carta and the conflict between King John and the Barons, there is a parallel futuristic story told in alternate scenes about a totalitarian state run by the Protector.”
The opera, which is a community-focused project, will be performed by professional musicians, the Durham Singers, Durham Cathedral Young Singers, and DCYS VOX: both choirs formed as part of Durham Cathedral’s music outreach programme. The choirs will be joined by soloists Deryck Webb (tenor), Clare Tunney and Harriet Beckham (sopranos); the Choristers of Middlesbrough Cathedral;  children from St Edwards RC, St Augustine's RC, and St Bernadette's RC Primary Schools in Middlesbroughand pupils from Durham Johnston School, Durham.
Composer Timothy Craig Harrison said: “It was important that this opera should be able to reach out and include as many people as possible, both performers and audience members. This posed a challenge on many different levels, both practical and theatrical, physical and musical: how to devise a work which would draw together  solo  singers,  choirs,  actors  and instrumentalists  of varying  ages  and  abilities,  from  primary  school  children  through  to professional musicians; a community opera that would bring people together in the joy of music-making and yet allow the performers to rehearse independently for much of the time, all finally coming together fairly close to the performance date.
“The Great Charter is an opera for everyone; adults and children and I hope that everyone will enjoy being part of it either as an actor, singer, orchestral musician or member of the audience.”
Michael Sadgrove, Dean of Durham said: “The creation of a community opera in celebration of the 800th anniversary of the Magna Carta, was conceived by the Cathedral and the Durham Singers. I am delighted that the Cathedral is both a commissioner and a venue for this new and imaginative work.  It is also particularly pleasing to be working with another faith organisation, the Catholic Cathedral of St Mary’s, Middlesbrough and primary schools in its Diocese.   These world premier performances, at Cathedrals at the heart of their communities, promise to be wonderful evenings of cultural enrichment.”
Durham Cathedral holds three issues of Magana Carta, 1216, 1225 and 1300.  The 1216 copy is the only surviving copy from this date and will be on display at Palace Green Library as part of its Magna Carta and the Changing Face of Revolt exhibition this summer.
Tickets:
The Great Charteropera will take place in Durham Cathedral on Saturday, 13 June and at Middlesbrough Cathedral on Saturday, 20 June at 7.30 pm. Tickets for both performances can be purchased through the Gala Theatre, Durham Box Office on 03000 266 600, or www.galadurham.co.uk
Posted by North East Theatre Guide at 18:34