theTalent is a superb double bill from BalletBoyz featuring ‘The Murmuring’ choreographed by Alexander Whitley and ‘Mesmerics’ choreographed by Christopher Wheeldon. The programme premiered at the Linbury Studio, Royal Opera House last year to capacity audiences and tours for the first time this spring playing at Darlington Civic Theatre on Tuesday 26 May. 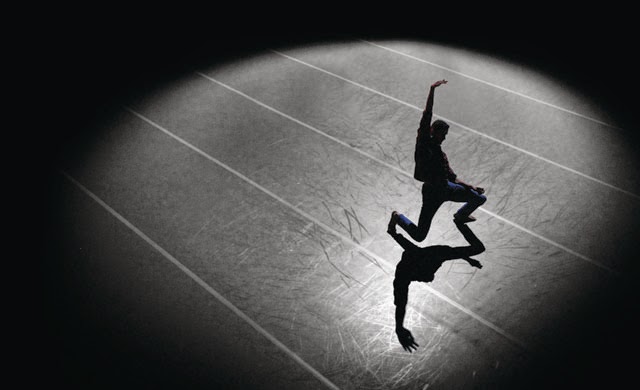 Alexander Whitley has chosen the subject/title of The Murmuring for his new piece; as well as a low, distinctive and continuous sound, murmurings is also the extraordinary undulating flight pattern of flocks of birds, particularly starlings. "I’m delighted The Murmuring is going out on the road,” says Alexander, “and that I’ve had another opportunity to work with the BalletBoyz after having enjoyed so much working with them making the piece." Set to music by the London based electronic duo Raime (Tom Halstead and Joe Andrews) the precise nature of Alexander’s choreography contrasts arresting group dances with twisting, weighted solos; the company’s ten dancers create a seamless ebb and flow of beautiful movement.

Mesmerics is a piece created by Michael Nunn and William Trevitt, co-founders and artistic directors of BalletBoyz , with Christopher Wheeldon in 2004 for three men and two women. Christopher has re-worked the piece and re-created it for eight of theTalent’s dancers. “We’ve always loved the piece,” says Michael Nunn. “The music is a gorgeous score by Philip Glass featuring haunting, hypnotic string sections. We knew it wouldn’t work in the old format because there’s a lot of pointe work and traditional partnering, so Chris has re-invented it and we’ve worked with him in tiny moments through his busy schedule.”
Tickets:
BalletBoyz perform at Darlington Civic Theatre on Tuesday 26 May. Tickets* are priced £21, £19 and for under 16s £11
To book contact the Box Office on 01325 486 555 or visit www.darlingtoncivic.co.uk
*All ticket prices include a £1 restoration levy

Breaking News is the new EP from North East band Peculiar Disco Moves. The new video is a portrayal of celebrity life, where red tops will sell their Granny to get a picture of a Z-lister parking his car one minute, then drop him or her like an anchor in the sea the next.
See the new PDM video on this link here
Follow Peculiar Disco Moves here
Posted by North East Theatre Guide at 19:55