A Singing Plant. A Daring Hero.
A Sweet Girl. A Demented Dentist.
S. A. Productions proudly present,
Little Shop of Horrors
Newcastle Northern Stage
Tuesday 19th & Wednesday 20th May 2015
On the nineteenth day on the month of May, in the year two thousand and fifteen, the Geordie race will encounter a deadly threat to its very existence. And this terrifying enemy will surface – as such enemies often do – in the seemingly most innocent and unlikely of places. 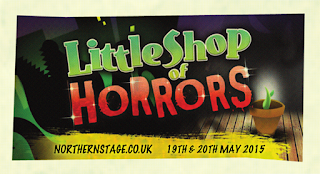 Brought to you by the winning team who produced the sensational North East premier of ‘Sunshine on Leith’ in 2014; Little Shop of Horrors promises to be Mean, Green and Baaad! Joined this year by International director Ian Waller (Singing in the Rain, Mamma Mia) hot off the plane from his Australian ‘Walking with Dinosaurs’ tour and welcoming back musical director Richie Anderson (Dirty Dancing, Sister Act).
Little Shop of Horrors, an affectionate spoof of 1950s sci-fi movies, is one of the longest-running Off-Broadway shows of all time, that has become a house-hold name, thanks to a highly successful film version and a score by the songwriting team of Howard Ashman and Alan Menken, who redefined the animated musical film with Disney’s The Little Mermaid, Beauty And The Beast and Aladdin.
The action centres on down and out Seymour Krelborn, a florist's assistant, who becomes an overnight sensation when he discovers an exotic plant with a mysterious craving for fresh blood. Soon the ill-tempered Audrey II grows into a singing carnivore who offers the naive Seymour fame and fortune in exchange for feeding its macabre appetite, finally revealing itself to be an alien creature poised for global domination.
Charming, tuneful and hilarious, with tongue firmly planted in Audrey II’s giant cheek, Little Shop of Horrors walks a fine line between darkness and light, leaving the audience a little bit terrified but fully entertained and laughing all the way to the bar.
S. A. Productions, in conjunction with Sage Academy, aim to build relationships and collaborations between talented artists, renowned directors, choreographers and musicians to produce thrilling, powerful, and engaging entertainment. Each production offers local performers a great opportunity to work with some of the best in the business.
Sage Academy of Performing Artsis already an established field-leader with its professional full-time diploma course boasting over a decade of dancers, singers, actors and performing arts graduates – with over 90% enjoying successful careers in all aspects of the industry.
The Sage Academy reputation is such that highly respected industry professionals like Ian Waller, Mark Hedges (Les Miserables, Oliver), and Lee Proud (Billy Elliott, Guys and Dolls) have chosen to work with the Newcastle-based company over the past four years. Their endorsement confirms Sage Academy as the place to study performing arts in the North of England, negating the need for the next generation of hopefuls to move south in order to pursue their dreams.
That’s music to the ears of Lucy Sage, Director of S. A. Productions and Principal of Sage Academy: Lucy, originally from Morpeth, graduated from the internationally renowned Italia Conti Academy in London in 1995. She resolved to return to her native north east and to offer youngsters the chance to fulfil their performing arts potential and develop their talents without turning their backs on the region. 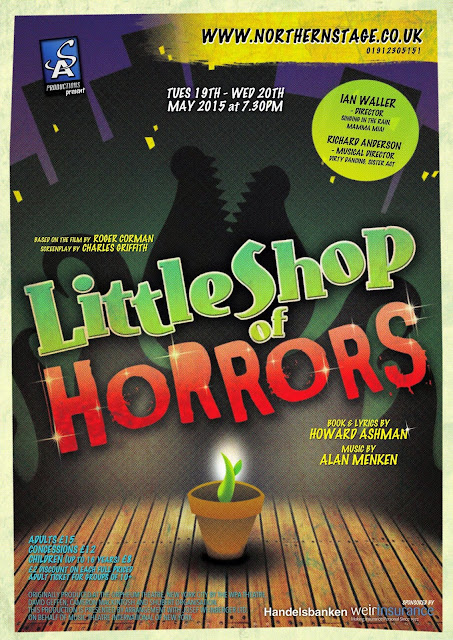 Almost fourteen years on, Lucy’s legacy is a growing reality.  Lucy Sage, Principal of Sage Academy comments: “We are extremely excited about this production – I think it’s one of the best musicals around and never fails to entertain audiences of all ages. ‘Little Shop’ is however, one of the most challenging shows we’ve ever produced, in addition to
co-ordinating a team of professional directors, choreographers and musicians from all over the world, we have a masochistic dentist, a specially trained puppeteer and four man-eating plants to deal with!
I remember watching the 1986 Frank Oz film as a child; I loved it then and love it even more now. I’m always attracted to shows that have the audience, laughing, crying and ready to dance in the aisles. This honest and fresh new production of ‘Little Shop’ will be a gory, spine tingling, ‘glitter and sequins’ treat for all the family.”
Tickets: 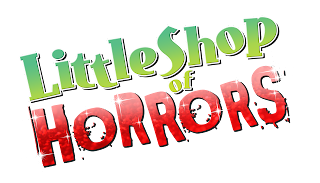 Little Shop of Horrors appears at the Northern Stage in Newcastle on Tuesday 19thMay and Wednesday 20th May 2015. Tickets are available from the Northern Stage website: www.northernstage.co.uk/whats-on/or from their box office: 0191 230 5151.
Posted by North East Theatre Guide at 20:38