TWO TICKETS TO THE GUNGE SHOW?
The Gunge Show,
Barnard Castle Witham Arts Centre
Saturday 18th July2015
A leading North East comic is hoping kids will see the funny side of his jokes when he performs at the first ever Barnard Castle Comedy Festival.
Geordie comedian Lee Kyle has announced that he will be performing his family-friendly comedy show, The Gunge Show, at The Witham Arts Centre on Saturday 18 July. 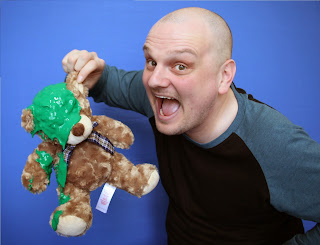 A frantic, boisterous affair akin to the Saturday morning kids’ game shows of the eighties and nineties, The Gunge Show sees Kyle supervising two teams of comics competing in a series of ear-splitting games to save their team captain from a gunging.
Speaking ahead of the show, Lee said: "I love Barnard Castle - the festival has a brilliant line-up and I'm chuffed to be a part of it. My show's for kids and stupid adults. It has gunge in it and it is a right laugh, so please do come along.  I have done the show before and people liked it, so I'm not just guessing. It really is canny good."
Featuring gung-ho contributions from Si Buglass, Nicola Mantalios-Lovett, Sammy Dobson, and Matt Reed, the show will be laden with rapturous stupidity and plenty of near-the-knuckle asides for the grown-ups.
Frenzied rounds see participants – and plucky audience members – insulting each other, showcasing their special talents and shoving a ghastly assortment of foods into each other’s faces.
A recent review by the comedy website Giggle Beats compares the show to the "puerile gaiety of Dick and Dom’s In Da Bungalow – but with lower production values and actual comedians. The show is full of psychotic, inclusive charm that even the hardest heart can’t help but be taken in by."
The Barnard Castle Comedy Festival is organised by Teesdale comedy promoters Funny Way To Be.
Tickets:
It takes place on Saturday 18 July 2015 at The Witham Arts centre on Horsemarket.
Shows will run from 12pm until late, with Lee Kyle's Gunge Show kicking off the festival at noon.
Earlybird day tickets for the festival are on sale now, priced £45.  For more details on the festival, visit barnardcastlecomedy.com.
On The Web:
Facebook: www.facebook.com/barnardcastlecomedyfestival
Twitter: https://twitter.com/BarneyComFest
BARNARD CASTLE COMEDY FESTIVAL SHOWS
•       12pm - 1pm Lee Kyle presents The Gunge Show
•       1.30pm - 2.30pm Lost Voice Guy: Disability For Dunces
•       3pm - 4pm Tony Law: Nonsense In Progress
•       4.30pm - 5.30pm Jo Caulfield: Awkward Conversations
•       6pm - 7pm TBA
•       8.30pm - 10.30pm Alex Horne: Monsieur Butterfly
DATE: Saturday 18 July 2015
VENUE: The Witham, 3 Horsemarket, Barnard Castle, Durham, DL12 8LY

Click on this link for more details about Be My Enemy / Alterred at The Cluny
Posted by North East Theatre Guide at 21:43