It started with the flies

In the early 20th century some ladies had had enough and so they decided to take matters into their own hands. As Northern Stage’s next generation of performers reveal the plot the men start to disappear and the sales of fly paper goes through the roof.
Susie, we are told, say “Always do what you want” but by the end of the story things may have gone too far. As bottles fly all over the stage perhaps the ladies solution has become a problem in itself.
Last year the theatre had supported a very talented bunch of recent graduates to produce ‘The Man Who Thought The Moon Would Fall Out Of The Sky’ which was fantastic so expectations were are for the new crop to see what they would come up with. It feels like a privilege to witness to start of so many promising careers. ‘Send More Paper’ is no exception. The new company has no weak links and the new production has a mix of the horrific and of light humour. The young cast are always energetic and engaging.  The clever use of torches adds intimacy to certain scenes. The scenes of violence are disturbing, yet well acted, and provide a context for what was to follow.
This is a powerful yet bubbly production that will hopefully be the foundation for each actors career.

The show continues at Northern Stage on the 29th March 2014 at 2pm and 7.30pm (www.northernstage.co.uk) before moving to Queens Hall Hexham 1st April 2014 (www.queenshall.co.uk) and Alnwick Playhouse 2nd April 2014 (www.alnwickplayhouse.co.uk)
Follow the progress of North on Twitter: @north_ns
Applications for North 2015 will open in September 2014. 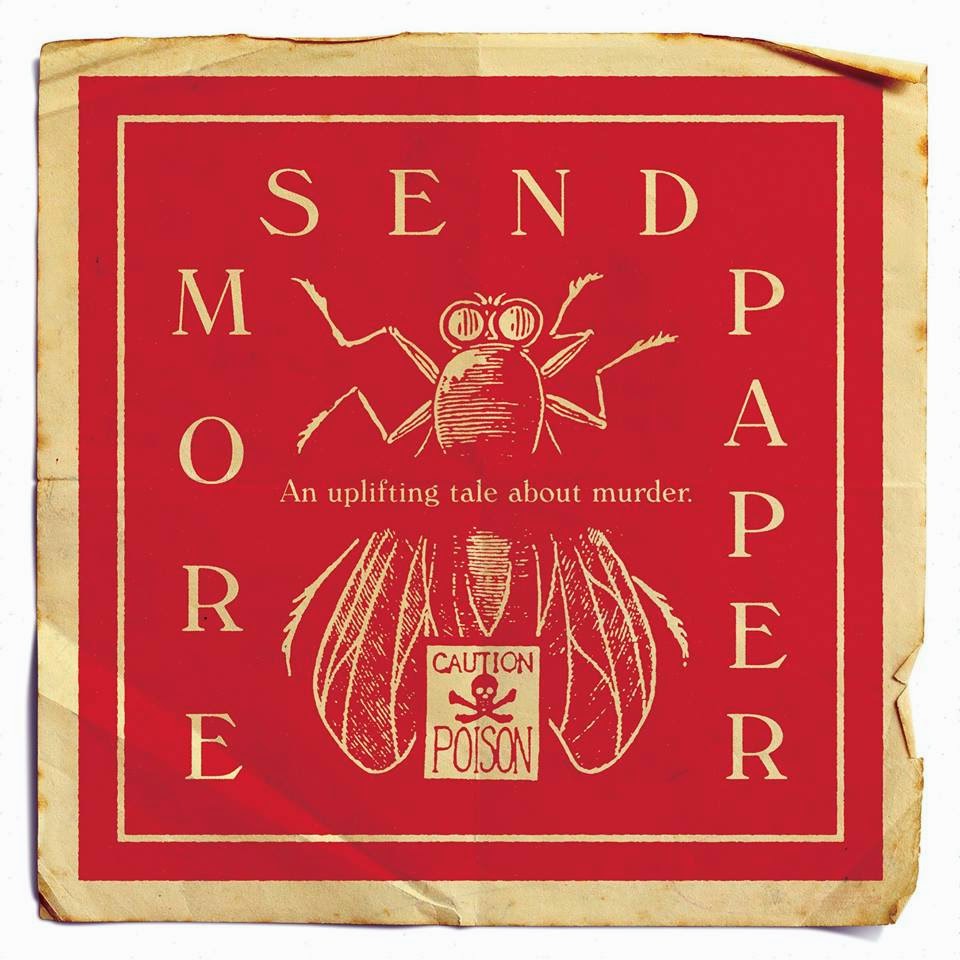 Posted by North East Theatre Guide at 23:13 No comments:


THE STEAMIE by Tony Roper, music by David Anderson 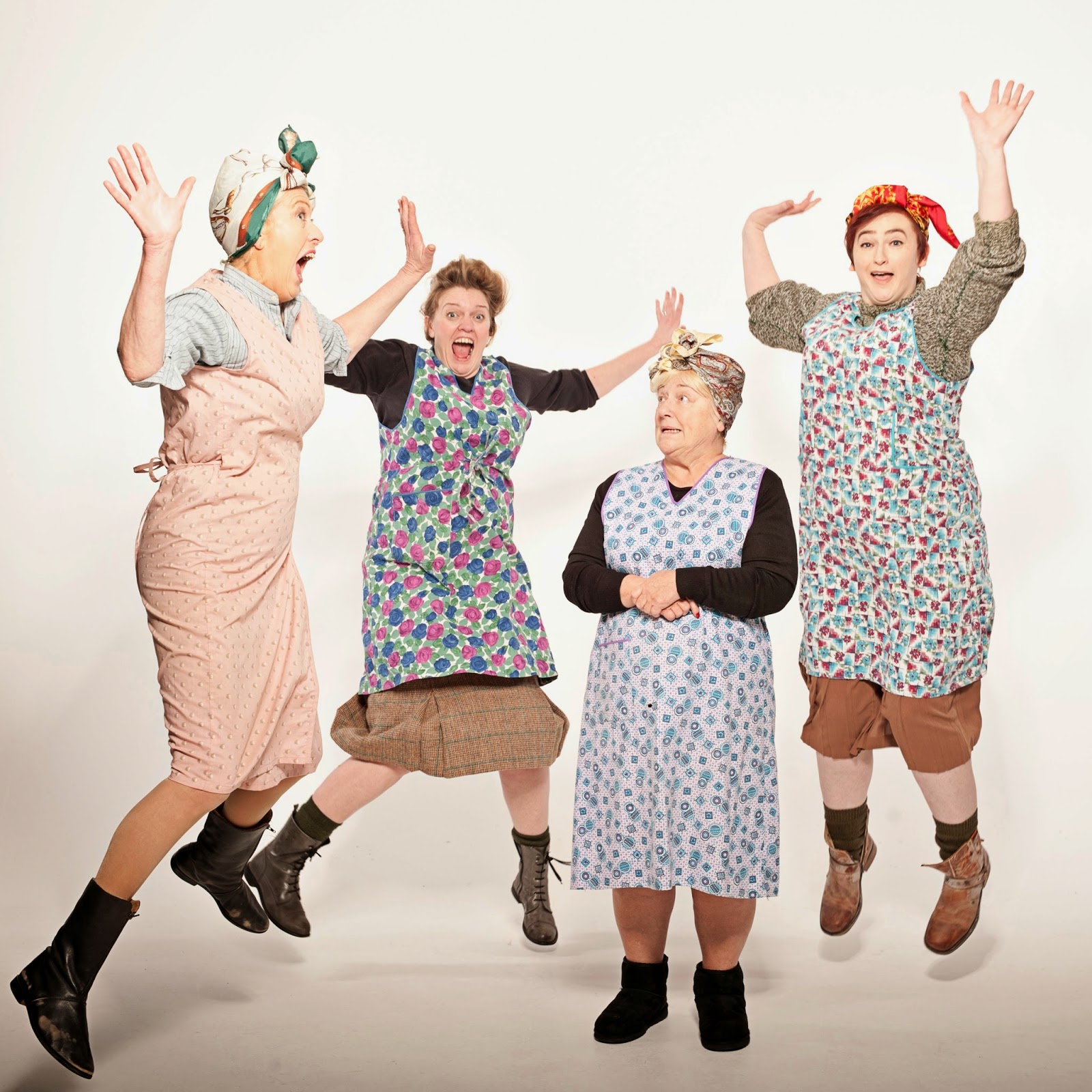 It’s Hogmanay at Newcastle's Peoples Theatre's latest production, and the women are working as usual, washing and drying clothes and blankets for their families.  There’s fun in the air, though, and good times and good gossip to be had with friends and their neighbours in the steamie. ‘The Steamie’, a comedy written by Tony Roper of Rab C. Nesbitt fame, has become one of the most performed plays in Scotland since its opening in Glasgow in 1987.
It shows the lives of a group of four women, Magrit (Sarah McLane), Dolly (Anna Dobson), Doreen (Jessica Hannah) and Mrs Culfeathers (Maggie Watson) as they work in a Glasgow steamie, a communal washhouse.

It’s the early 1950s, and the women are concerned about the coming of the new fangled launderette, and what it might do to their sense of community.  They’re worried about the impact that television might have, too, but not about the impact of hapless floorwalker Andy (Keith Henderson).  Their lives are hard, but warm, and not just from the hot water and steam.  There’s an awareness of the way they are exploited – ‘What are we?  Skivvies, unpaid skivvies’ – but really this is a funny play, touching and nostalgic at times but hilarious at others.  Nobody who sees the mince and tatties scene ever forgets it. 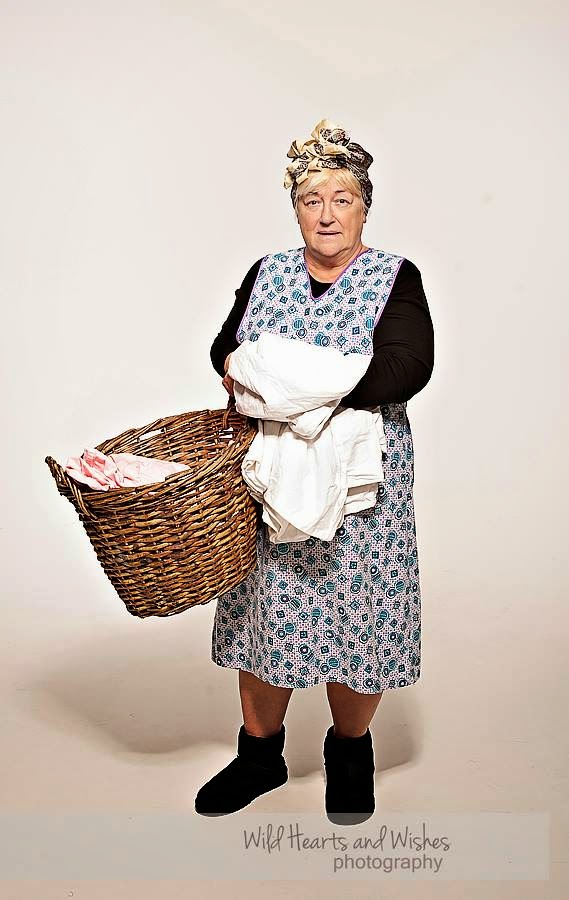 Tickets for this People’s Theatre production, directed by Tony Childs, are on sale now (and would make a wonderful Mother’s Day present!)
In addition, the People's Theatre have recently revealed that their Christmas Panto this year will be RAPUNZEL. Join the long-haired heroine, along with Prince Flynn, Queen Rosita, Jenny Jangles, Jasper and more, on their adventures to save her from the tower and defeat the wicked Mother Gothel. This tangled tale is written by Philip Meeks and directed by Anna Dobson, who brought us last year's hugely successful Peter Pan. The show will run from Saturday 6 to Sunday 14 December.
Photos by Paula Smart: https://www.facebook.com/wildheartsandwishesphotography

Republica and Space
Newcastle Academy 19 3 14
The 20th Anniversary is more than enough of an excuse for 2 bands who have had their songs sync’d on many a tv programme.
First up were Space who are touring in support of their new CD “Attack of the 50 ft mutant kebab”. They played a mixture of old and new with an interesting backdrop of  video clips. The live feel of the songs really helped to bring the older hits alive. The large crowd happily bounced along to “Female of the Species”, “Me and you against the World”,”Avenging Angels” and “Neighbourhood”. Chuck in a healthy mix of newer stuff like 2004s “Zombies” and the title track of the new album and we have a great start to the set.
Republica were headlining the set tonight and Saffron worked the crowd really hard. The soundman never seemed to get a grip of the sound where I was. Even though I was standing in front of the guitar I could rarely hear it and it seemed to be just there for appearances. In contrast the laptop and sequencing proliferated the set including adding bass guitar. The young drummer put in a shift and a half as he pounded his set. The two highlights were “Drop Dead Gorgeous” and “Ready to go”, the latter was then repeated for the encore.
It is canny seeing two popular bands from the 90s but one feels the billing of the show was in need of a reversal.


Family theatre isn’t just for Christmas
Chuckle Brothers in Space Oddity
Newcastle Tyne Theatre 15th March 2014.
The Chuckle Brothers, ably assisted by their real life brothers The Patton Brothers, were able to delivery a couple of hours of family friendly variety entertainment. The audience laughed and everyone went home happy. Mission accomplished.
The show starts with the idea that Barry and Paul Elliott have gone shopping in a toy shop and after pressing a red button in a space ship that have found themselves on board a space ship manned by the Captain (Jimmy Patton) and Spot (Brian Patton). A bad guy needs to be stopped before he takes over the ship and then they can safely return to Earth. Additional support is given by Richard Morgan. The party tricks that give the show move of a variety show feel come from the husband & wife team Safire - Stuart and Jayne Loughland carry out random illusions at various points in the show.
For the show to be successful it has to keep both the parents and the young ones happy. The four brothers on stage clearly have a chemistry on stage. They naturally know what the other is about to do. This helps with the smooth delivery of the gags and the punchlines. The jokes work on both levels – a few jokes have the younger members of the audience wondering why their parents are laughing. 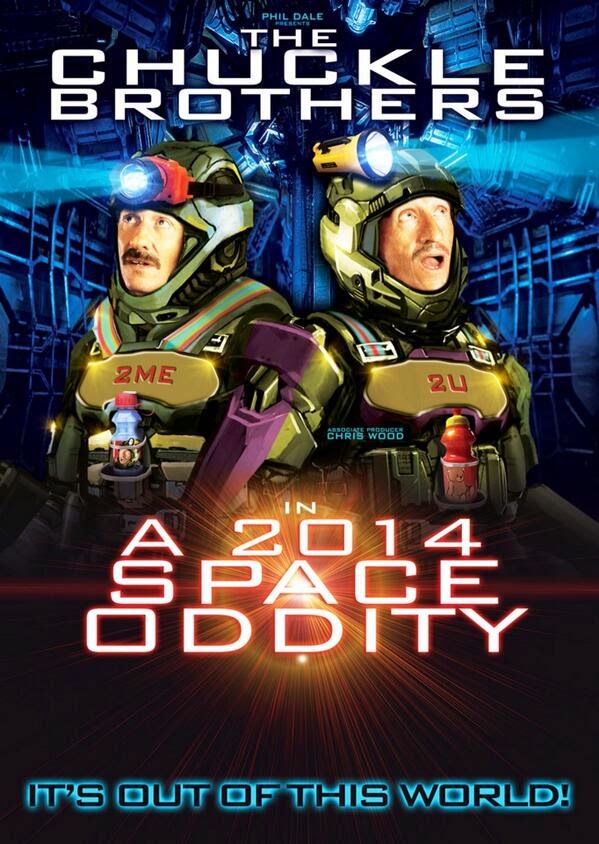 The show feels like a Panto complete with a variation of the 12 Days of Christmas at the end. This is not high end theatre and the story is just a vehicle for entertaining routines from the cast. The acid test is how the younger members of the crowd react and they loved it, especially when the parents were invited up to help out in a messy routine. The best of the illusions from Stuart and Jayne Loughland came at the start of the second half with some black light theatre tricks with a couple of spacemen appearing to be weightless on stage.
It is great to see this historic venue being used as it was originally intended – to entertain. Hopefully in the coming year more shows will happen in what is often Newcastle’s forgotten theatre. It is also nice to be able to take the young ones along to a live theatre event at another point in the year to the usual Christmas Panto. There is a lack of children’s variety shows on tv and judging by this young audience there is a demand for them.
The tour continues. 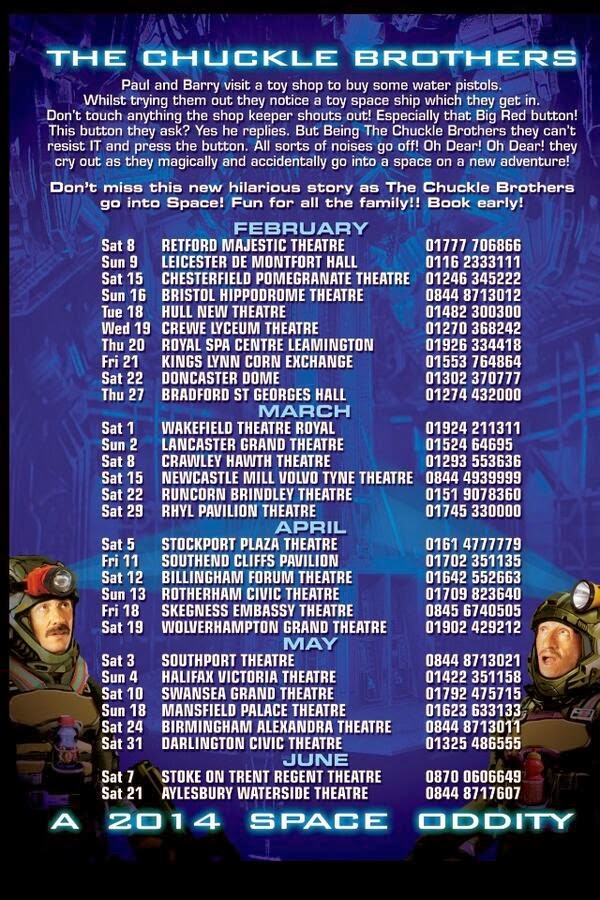 Review: How to Occupy an Oil Rig - Newcastle Northern Stage


How to Occupy an Oil Rig

A story about protesting is the latest production from Middlesbrough’s Daniel Bye who is ably joined on stage by Kathryn Beaumont and Jack Bennett.
Daniel met the audience as they arrived via the stage and urged everyone to take some plasticine and to make a representation of themselves protesting. Thus the stage, comprising mainly of big Lego blocks, is completed by figurines of the audience. At the start the crowd revealed that their protesting has generally been limited to signing online petitions. The story carries everyone on a high speed tour of protests from those petitions to hanging banners off oil rigs via far more contact with the boys in blue than is normal.  Lucy Crimmens’ Lego set is manipulated by Daniel, Kathryn and Jack as they interact with the story and the audience. An invitation to hold a protest results in 3 of the audience kicking some of the set. 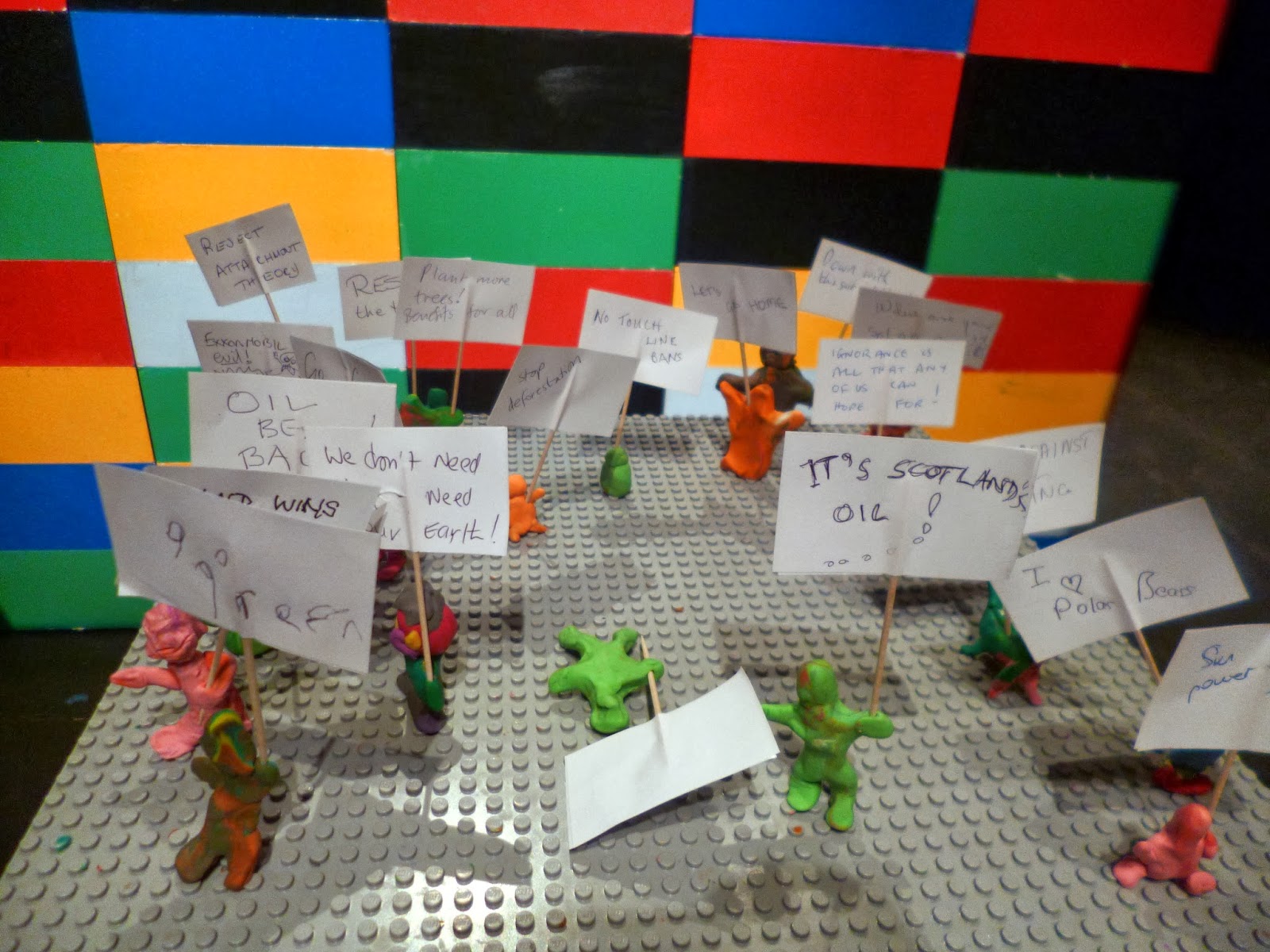