Review: They Shoot Horses, Don’t They? at People’s Theatre


Marathon Madness
They Shoot Horses, Don’t They?
Newcastle People’s Theatre
Until Saturday 23rd May 2015.
Depression era America resulted in desperate measures for hard times. Horace McCoy’s was written during this period and reflects the sacrifices made in order to survive. Ray Herman’s adaptation is a rare production to see on the stage as it involves a live band and a cast that fills the stage. Newcastle’s People’s Theatre are not known to shy away from the big productions and they have succeeded in bringing the spectacle on the pier to life.
The show begins with large crowds of couples signing up for a dancing marathon. They are promised food and accommodation as long as they keep dancing. The bonus is that they can win $1000 if they’re the last couple standing. Out to make money out of their pain is Rocky Gravo, played by Steve Robertson. He comes across at times like a social club compare – complete with singing.  Helping him out as a referee is Rollo who lives on her roller skates. Jess Chapman is perfect as the keeper of the rules as she shows no mercy to the dancers as they collapse.
The play focuses on a few couples. Ruby (Jessica Hannah) and Mario (Joe Robson) who are favourites as they have won previous competitions but will struggle this time as Ruby is expecting their first child. Some couples such as James (Craig Fairbairn) and Jackie (Moira Valentine) barely talk whilst Robert (Tom Potts) and Gloria (Sarah Scott) had just met before the contest started.
Central to the show is the dancing and the story is allowed to develop as the couples dance. This helps the show flow somewhat. Steve Robertson breaks the fourth wall regularly as the theatre audience find themselves applauding the action on stage. The other major piece in this show’s jigsaw is the live band under Musical Director Tom Albans. As the dancers are reduced to almost Shaun of the Dead style zombies after the relentless dancing, the band remain fresh as they keep up the tempo on events. Under the direction of Tony Childs and Sarah McLane the action is invigorating throughout the piece.
The show has a modern relevance. Television programmes like Big Brother or the many talent shows will often put the participants through scenarios that border on humiliation in order to increase ratings. The same applies in the dance marathon as “derbies” are introduced as a spectacle. Steve Robertson’s Rocky has a thirst for the extravaganza in preference for participant’s welfare.
When compared with the Newcastle Playhouse production in the early ‘90s, this show has accessible characters that the audience will quickly warm to. Whilst the cast go through the wars, the members of the audience are allowed to remain unscathed. The cast work hard and look genuinely in pain towards the end. The individual styles of dancing of each couple looks better than the tight choreography of previous productions. 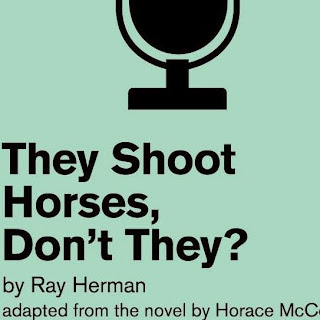 They Shoot Horses, Don’t They? is a passionate and touching tale which shows that the People’s Theatre are capable of great productions. Congratulations to everyone involved.
This review was written by Stephen Oliver for the North East Theatre Guide by Jowheretogo PR (www.jowheretogo.com). Follow Jo on twitter @jowheretogo, Stephen @panic_c_button or like Jowheretogo on Facebook www.facebook.com/Jowheretogo
Read the original JoWhereToGo Preview here
Tickets:
They Shoot Horses, Don’t They? by Ray Herman, adapted from the novel by Horace McCoy at The People’s Theatre, Newcastle from Tuesday 19 to Saturday 23 May 2015 at 7.30pm.
Tickets: £13.50 (Concessions £11)
Box Office: 0191 265 5020 (option 2) or online at www.peoplestheatre.co.uk
Posted by North East Theatre Guide at 00:29