With West End and touring production credits that include Chicago, Guys and Dolls, Educating Rita and September In The Rain and television roles in Brookside, Clocking Off, Merseybeat and Candy Cabs, Claire has established herself as one of the most popular and versatile talents in the UK. 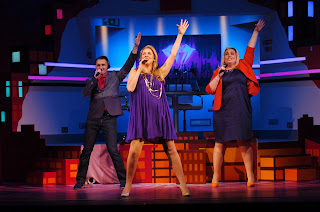 Sex In Suburbia is co-written by Claire Sweeney and Mandy Muden, directed by Ken Alexander (Hormonal Housewives) with set design by Mark Walters (Hot Flush). Packed with revealing and raunchy storylines set to a backdrop of sensational musical anthems including I’m Every Woman, I Want To Break Free and Somebody Else’s Guy, Sex In Suburbia will make you laugh, cry and dance in the aisles!
Penny Crowe (Lindzi Germain) is the host of a late-night radio phone-in and as Britain’s leading Agony Aunt, she takes calls about every date from hell and the occasional one from heaven. She is more than happy to dish out relationship advice, but is she as happy to take it…? Claire Sweeney joins Penny on her show as a ‘relationship expert’ while Carl Patrick revels in multiple roles which take in frigid footie fans, karate chopping kids and outrageous radio host, Rory Reynolds.

And as a way of keeping Sex in Suburbia ‘Real’ with a capital R, sassy and brave audience members, will be invited to share their own personal dating stories live on stage and will be rewarded with an Ann Summers goodie bag!
Tickets:
Sex In Suburbia is at Darlington Civic Theatre on Wednesday 27 May. Tickets* are priced £23 and £25
To book contact the Box Office on 01325 486 555 or visit www.darlingtoncivic.co.uk
*All ticket prices include a £1 restoration levy