Review: The Man and The Donkey at Customs House 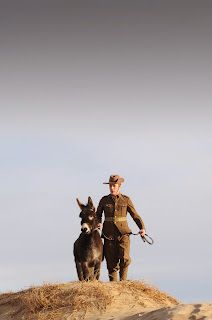 The Local Hero
The Man and The Donkey
South Shields Customs House
Until Saturday 23rd May 2015.
The Customs House’s new production pays tribute to the South Shields born hero, John Simpson Kirkpatrick, who gave his life saving others 100 years ago today.
Writer Valerie Laws found out about Australia’s hero, who had saved over 300 soldiers lives under fire at Gallipoli whilst visiting the country. Research revealed an interesting character who had statues, in his honour, all over Australia but was relatively unknown back home in Britain. At least now there is a statue back home in South Shields and the play written in his honour makes a triumphant return to his native town after 4 years.
The production feels like a documentary, drawing out the personality behind John Simpson Kirkpatrick, with some elements of a Greek tragedy thrown in for good measure.  The script explains how he ended up on the beach at Gallipoli with a donkey but it doesn’t overload the audience with too much exposition. Under director Jackie Fielding the funnier aspects of his life give a real sense of the man.
Kirkpatrick found himself as a young lad earning cash leading donkey rides up and down the beach. He was good at getting the beasts to do as he wished. After an accident leaves his Dad unable to earn, he finds himself looking for better paid work. The trouble is that the lack of work sees him heading to the merchant navy. After poor working conditions lead to him going AWOL he lands in Australia. War begins and Australia promises 50 000 men to help fight the Great War against Germany. John signs up with the hope of having a chance to visit home and his Mum. Instead he ends up fighting in Gallipoli. As a stretcher bearer he is under heavy fire as many young men are attacked by well armed Turks. Resourceful John finds a donkey and uses it to carry the wounded through the theatre of war.
The action takes place on a well designed split level stage. Throw in lots of loud bangs and a few pyrotechnics and the scene is set. There are actually two heroes in this story. One is Duffy, the donkey, which is portrayed by ingenious puppetry by the cast.  The other hero is Kirkpatrick and in Jamie Brown’s character we have a fearless, very matter of fact young man who is a credit to his family. His attitude in war may be on the verge on arrogance, as he sees little point in following orders, but he is never unpleasant. Jamie does a cracking job bringing the hero to life.
The remainder of the ensemble fill in a variety of roles and donkey operating. Their talent is able to shine through and as the action skips around the world they keep the story flowing. James Hedley and Dean Logan are frequently following orders as Gary Kitching leads the pack.  Viktoria Kay and Jacqueline Phillips often find themselves in the centre of the action.
The cast work hard to produce a very entertaining and moving tribute that is passionate about it subject. A fabulous eulogy for the fallen.
This review was written by Stephen Oliver for the North East Theatre Guide by Jowheretogo PR (www.jowheretogo.com). Follow Jo on twitter @jowheretogo, Stephen @panic_c_button or like Jowheretogo on Facebook www.facebook.com/Jowheretogo
Read the original North East Theatre Guide Preview here 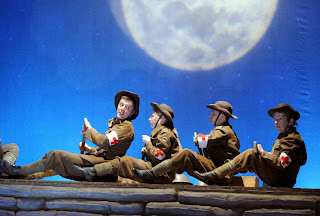