There’s No Musical Like It
Carrie: The Musical
Southwark Playhouse
Until Saturday 30th May 2015.
The musical that had wreaked havoc in 1988 returns in a slimmed down and hungrier form and it wants revenge. The end result is an amazing study on bullying and consequences.
Carrie was Stephen King’s first major novel in 1974. Four years later Lawrence D Cohen wrote his first screenplay for the cult hit movie that ensured everyone would know Carrie’s name. 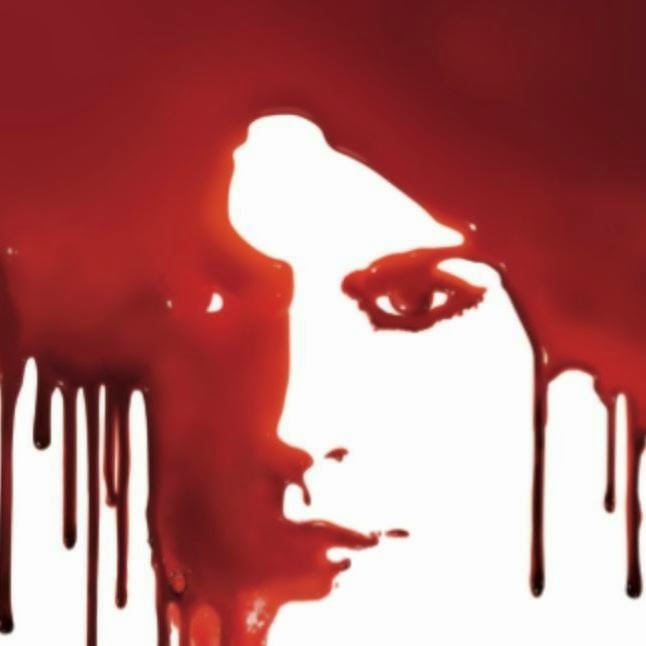 Fast forward to 1981 and Cohen and Michael Gore are inspired enough by a performance of Alban Berg's opera Lulu at the Metropolitan Opera House to begin work on a musical based on the Stephen King novel. Gore had award winning success with Fameand soon his Fame collaborator Dean Pitchford, fresh from success from Footloosewas on board.  The final piece of the jigsaw was that the Royal Shakespeare Company, looking for a sequel to Les Miserable, agreed to produce the show. With that track record what could go wrong?
A reported $8million later the show was shut down just 5 shows after opening night and the musical entered musical history as one of the most expensive flops. Mistakes included the RSC going for a Greece theme (with togas) rather than a Grease theme. That, for most flops, would have been the end of it but the birth of the internet kept Carrie’s flame alight. Books get written about it and interest continues. The big question was: if the mistakes were rectified – could Carrie work as a musical?
In 2010 the original team of Cohen, Gore and Pitchford announce that they would resurrect Carrie for an off-Broadway revival. These shows had much more positive reviews and lead to a cast recording. The resultant CD has, along with Urinetown, been on heavy rotation at Jowheretogo towers. We said if Carrie headed back across the Atlantic that we’d be there. We had to find out what the fuss was about. 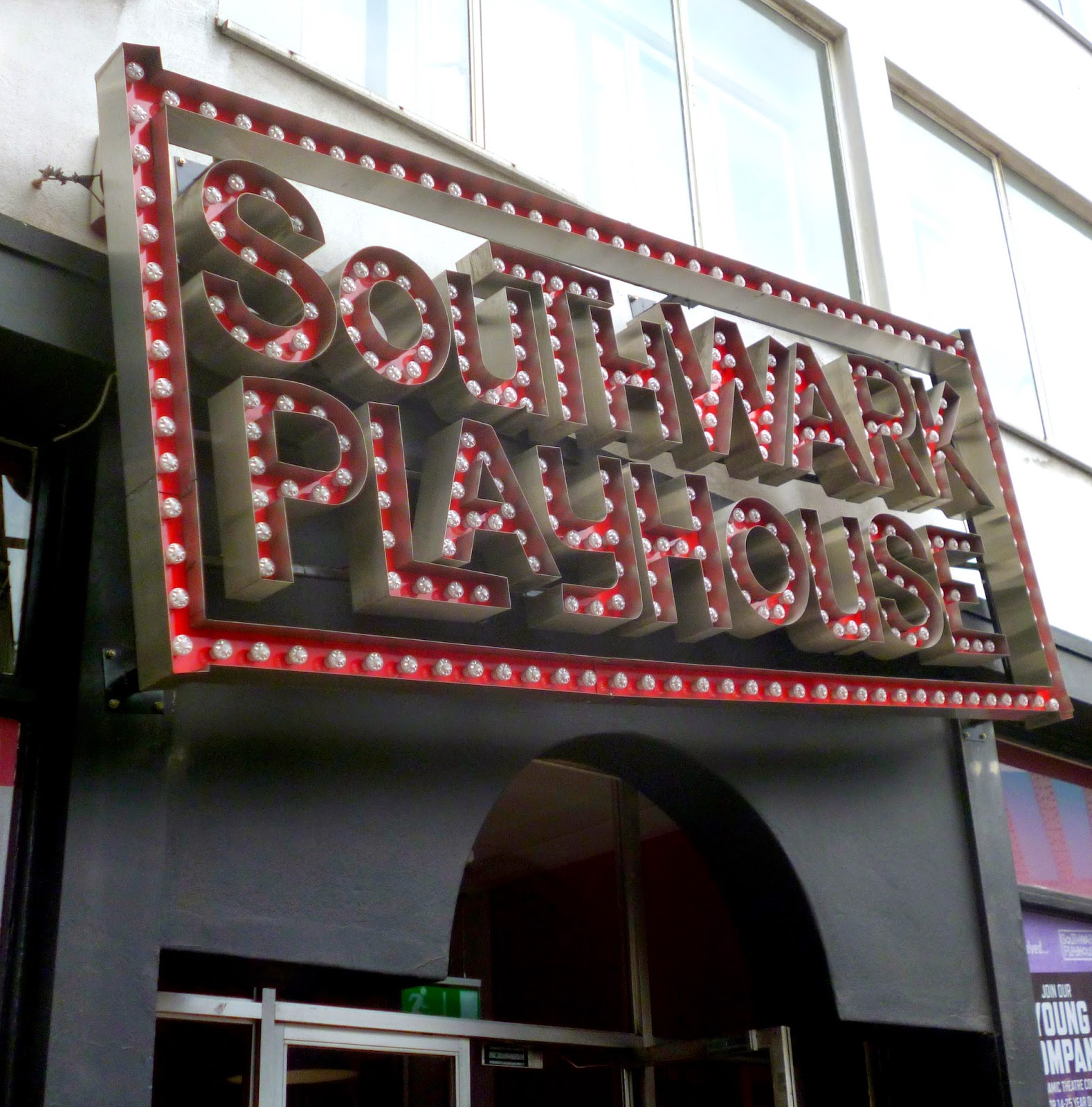 Southwark Playhouse is a well formed theatre, that was worth seeking out, a short walk from the Elephant & Castle tube station. I am surprised that none of the signage at the tube station flags up the direction to the areas nearest theatre as just about everything else was. The “large” space is incredibly intimate with just a few rows of seats on 3 of the sides of the extended performance space. The seats are tiered nicely to ensure a great view of the action.
A discordant sound, as the audience enters the auditorium builds up the tension like the opening theme on a 70s horror film. A single chair is in the centre of a grimy spartan set which is about as far removed from the brilliant white box set of the ’88 production as you can get.
The new version of Carrie begins with Sue Snell (Sarah McNicholas) being interrogated by unseen investigators. This is used as a narration tool throughout the story. Reports of the ’88 show stated how the story was baffling to anyone unfamiliar with either the book or the film. The addition of short interrogation scenes add sufficient exposition to help the story make sense. “We were just kids” says Sue as the ensemble enter the stage to sing the opening number “In” which highlights the uncertainties of acceptance and teenage life. From the start the singing is impressive and balanced. The unseen band, led by Mark Crossland, don’t put a note wrong and reflect the mood perfectly.
A gym lesson introduces us to Carrie, an outsider whose upbringing makes her socially awkward. Matters quickly get worse when, at the age of 17, she starts her first period in the shower afterwards. She thinks she is bleeding to death and asks her classmates for help and they respond cruelly and bully her. This is the point in which the updated book by Lawrence D Cohen enters the 21stcentury as a classmate films the episode on her mobile phone and uploads it to the internet.
Gym teacher Miss Gardner (Jodie Jacobs) tries to show some compassion but doesn’t, upon reflection, handle the situation in the best way. Carrie is sent home to recover which sets her up for more taunting by bullies as she leaves the building. In response she bursts into her signature tune “Carrie”.  This is an opportunity for Evelyn Hoskins to show off her perfectly tuned voice which is perfect for the massive number. 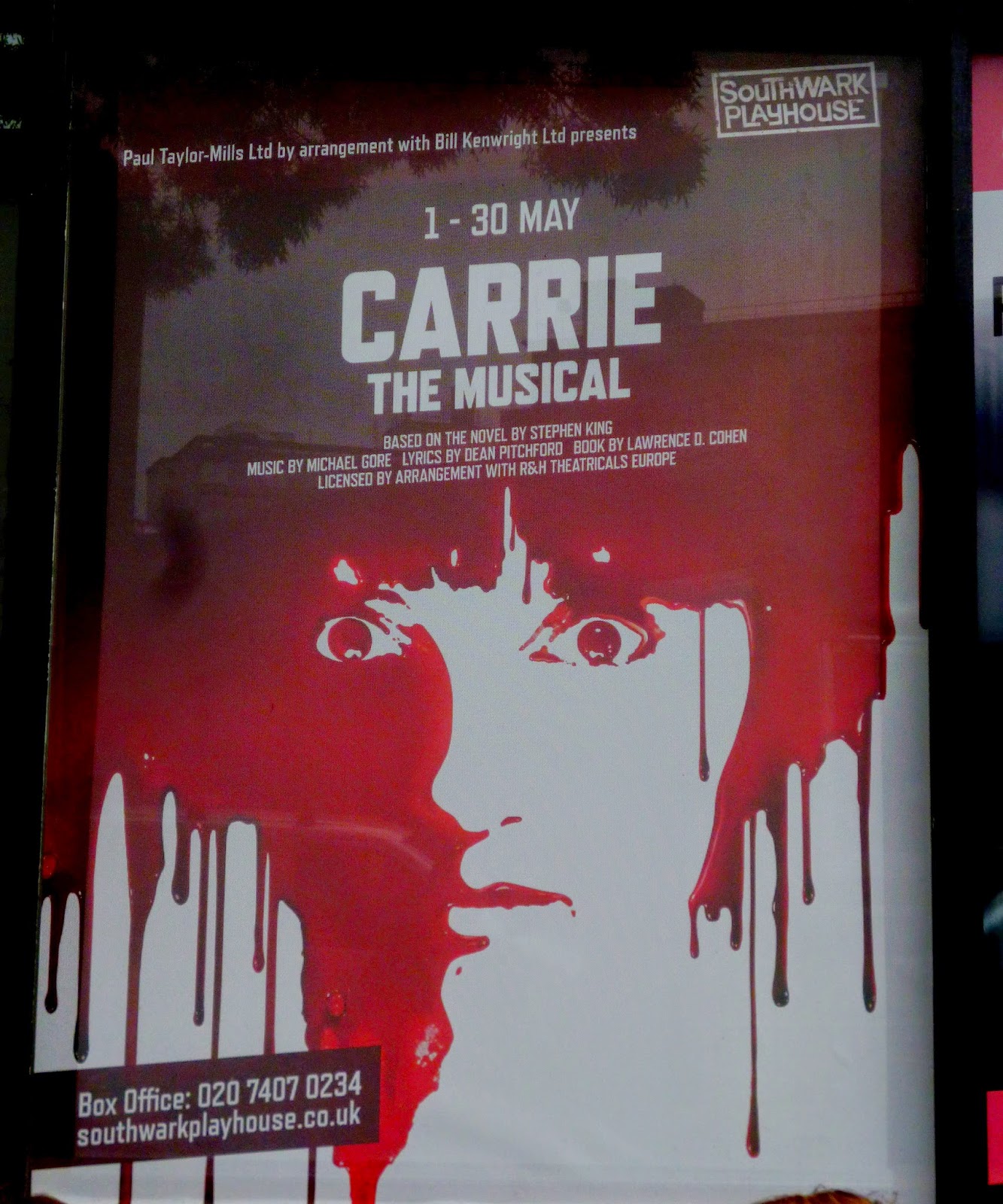 When poor Carrie gets home her mother is busy earning her keep doing clothing alterations for others whilst singing along to a religious programme on the radio. Kim Criswell has a superb voice and when she duets with Evelyn Hoskins their voices couple in perfect harmony. But it is not just their voices which are melded together as they have onstage stage chemistry which reflects a loving mother daughter relationship. When Carrie tells her mother about the shocking events at school she doesn’t get sympathy. “And Eve Was Weak” is a powerful number which quickly demonstrates the nature of this unusual maternal relationship. Ultimately Carrie is pushed through a trapdoor and told to pray for forgiveness for her sins.
Back at school Sue has second thoughts about how the bullying but her best friend Chris (Gabriella Williams) is unrepentant. “The World According To Chris” works well as a number to set up Chris as a teenager for whom offence is the best form of defence.
When her boyfriend Tommy (Greg Miller-Burns) suggests that Sue apologises he quickly finds that instead of inviting Sue to the prom, he is going to ask the initially reluctant Carrie instead.  Chris, who by this point has been banned from the school prom, decides to wreak revenge on Carrie and so the stage is set for the night no one will forget.
Carrie The Musical is as much study of the problems of teenage relationships as it is a look into a fanatical religious upbringing. The major difference from ’88 is that the story now makes sense – Sue adds important narration and Carrie’s telekinesis is given a chance to be explored rather than suddenly be unleashed in the final scene without explanation.
The singing is very strong and lacks any weak links in any of the harmonies. The acting was also a pleasure to watch. The mother daughter relationship feels believable.  Sue and her boyfriend Tommy come across as well-meaning whilst Chris and her boyfriend Billy (Dex Nolan) are suitably repugnant without being over the top. In short Carrie is finally a production which is as least as good as the original novel.
The special effects from Jeremy Chernick and Floyd Hughes add to, rather than detract from, the story. Sparks are not the only things to fly around the stage. The lighting design by Tim Oliver does a great job of picking out the action and setting the mood.
The only minor glitch is the programme. For £3 one would expect more than a list of the team. Why is there no context behind either the story or the production? Given that books have been written about “Carrie The Musical” surely someone from either the venue or production wanted to say a few words about the musical?
This is simply one of the best musicals I have seen.  It is Wicked for those who have grown up from the ‘Cbeebies’ tale currently in the West End. Gary Lloyd has directed an intelligent, powerful and entertaining study into teenage life and it is well worth seeking out. I hope it tours around the UK as it deserves much greater exposure. The cast and creatives should be proud as Carrie stands tall above the rest.

Breaking News is the new EP from North East band Peculiar Disco Moves. The new video is a portrayal of celebrity life, where red tops will sell their Granny to get a picture of a Z-lister parking his car one minute, then drop him or her like an anchor in the sea the next.
See the new PDM video on this link here
Follow Peculiar Disco Moves here
Posted by North East Theatre Guide at 15:04