“The War Is Not Funny, Sir”
“I’ve A Feeling That May Be The Point”
Wipers Times
Newcastle Northern Stage
Until Saturday 7th October 2017 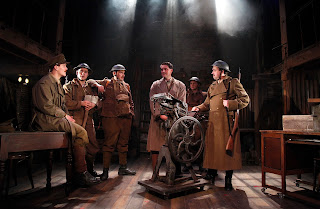 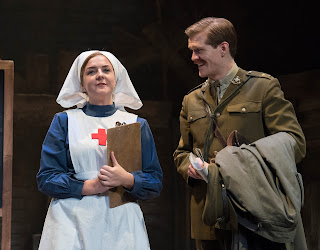 1916. Ypres. Belgium. (Though the British Tommies mispronounce the place “Wipers”).  Two officers find a printing press and start producing a satirical newspaper for the delight of those on the Western Front. Wipers Times is written by Ian Hislop, editor of satirical magazine, and Nick Newman, Private Eye cartoonist and scriptwriter of Spitting Image, and it looks at the  efforts of the officers Private Eye to raise the morale of the men whose life was a daily hell full of gas attacks, machine guns and enemy soldiers. 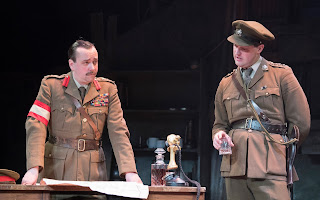 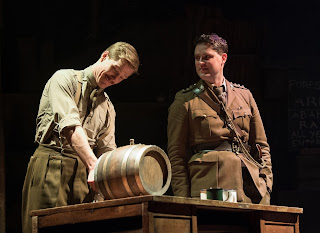 Sherwood Forester Captain Fred Roberts, as played by James Dutton, is a glass half full type of character. Always able to find the funny side to some of the most awful situations, he had the skills to keep his men motivated. Lieutenant Jack Pearson (George Kemp) is a perfect partner for Fred to produce an entertaining, and grammatically correct, publication for the troops. Whilst they could come up with the words and the ideas, as luck would have it, they have in their ranks Sergeant Harris who was a printer on civvy street and he is able to get the publication into print. 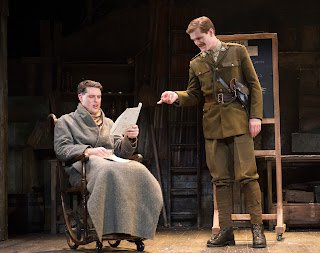 The use of comical pseudonyms for cutting observations in articles was trail blazing for modern publications like Private Eye. The use of fake and funny adverts is reminiscent of Viz in its prime. Composer Nick Green has been able to insert musical interludes and musical hall set pieces to typify the almost absurd nature of their adverts. 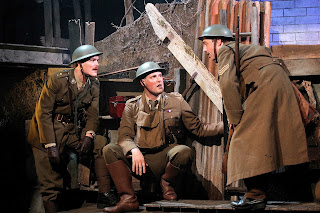 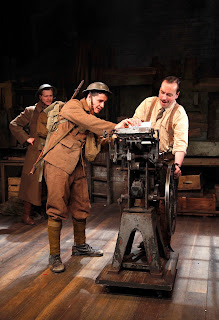 Director Caroline Leslie has enabled an almost faultless and entertaining production from the 10 strong ensemble. The meetings by the staff miles behind the front line have the feel of Blackadder Goes Forth at its best. The discussions between the officious Colonel Howfield (Sam Ducane) with the more sympathetic General Mitford (Dan Mersh) does have the Captain Darling vs General Melchett situation comedy about it. Between the copy being produced for the paper and the couple not seeing eye to eye in the staff house, there was plenty of laughs for the packed Northern Stage audience. 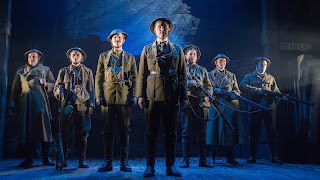 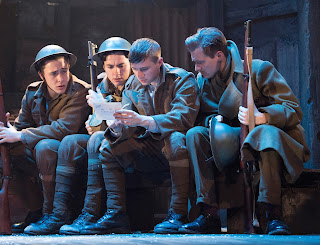 There have been a number of productions as the Great War reached its 100thanniversary. The set design in many of these shows often settles for a simple trench scene. The design in Wipers Times by Dora Schweitzer has the versatility to be not just a trench, but also the production facility and a music hall too. The cast can also perform skits, from behind the trenches, that illustrate the typical content of the Wipers Times to great comic effect. 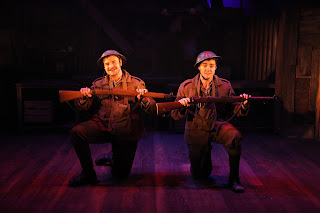 Yes the show has swipes at the Generals, the Germans and the general situation that the rank and file soldier found themselves in. There are a couple of knowing digs at the Daily Mail newspaper too. There are a number of great comedic points that had the audience laughing. Wipers Times, though, is more than just a comedy. It has suitable pathos and deferential respect for those who laid down there life in what was supposed to be the war to end all wars. The narrative doesn’t get too maudlin though. This is a true story and it is valuable to remember the efforts of this group of men at maintaining morale. 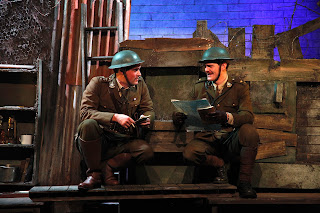 A packed house enjoyed tonight’s show and it is really difficult to fault it. Entertaining and educational about a forgotten episode in history, the great cast delivered a wonderful performance at Northern Stage.
Review by Stephen Oliver
Photographs by Alastair Muir
Tickets:
Tickets from £10 are available from the box office on 0191 230 5151 or online from the website: https://www.northernstage.co.uk/whats-on/the-wipers-times
Running time: 2 hours 10 mins (including interval)
Recommended Age: 12+
Post-show discussion: Thu 5 Oct
Video Trailer: https://youtu.be/7ozT_xO0DwQ
Posted by North East Theatre Guide at 00:39