REVIEW: What Once Was Ours at Newcastle Northern Stage 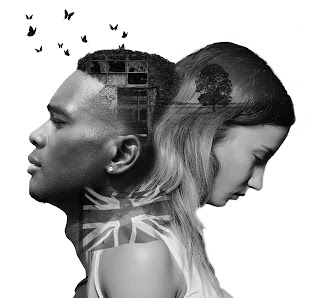 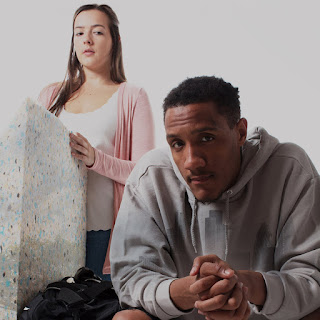 A series of interviews with 215 young people aged between 14-18 from four different communities led to the creation of What Once Was Ours. This including a number from Newcastle & Gateshead who discussed the experiences of living in . The show looks at the difficulties of living in a country in which fear about one’s neighbours isn’t uncommon.

The show was performed as part of the region’s Juice Festival and the organisers had brought together a group of 10 people aged 14-25 to produce a response to What Once Was Ours. They had seen the show last week in and then met 3 days ago to create a series of situational drama that looked at the issues as they saw it. The fact that 10 people who had never previously met could create half an hours theatre in just 3 days whilst working with Zest Theatre’s Toby Ealden is impressive in itself. 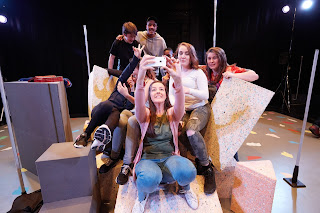 The response looks at racism, homophobia, fear of teenagers and the struggle of identity. The audience watch two performers outside in a scene about racism and exclusion which used the colour of their shirts as the area of contention. It was effectively a silent production as they were outside and it worked as a piece of physical theatre. Later in the show they were unable to join us inside as the door was locked - a clever analogy for troubles abroad that we are aware of but some of us don’t want the victims joining us in our country.

The action then moved to a tight space representing a lift. It is unusual to be so close to the rest of the audience, everyone was packed in like a rush hour commuter train. The two actors had a loud conversation about a third person called Brian and it looked at attitudes towards homophobia and the labels that we give people. 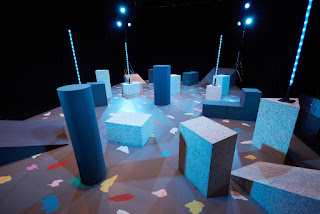 It was a relief to then move to the art corridor which was doubling as a Metro train. The remaining members of the young troupe then addressed issues of racism and prejudice against young people. Based upon a real event in which a young person was verbally abused on a bus when reading a book about Noble Peace Prize winner Malala Yousafzai, the audience empathised with the difficulties she faced. Someone objected to the book and screamed “Why are you reading a book about a terrorist?” and soon the bus was chanting abuse at her.

Next we are asked to consider if we are too quick to make assumptions about young people we meet on public transport. Perhaps they are working in the community trying to make a difference and it is too easy to assume they are up to no good. There was humorous moments too as it finishes with the annoyance of sitting next to someone who is eating on the train providing light relief.

As a curtain raiser to the main event, the team of 10 did really well and the audience were getting used to becoming a part of the action as we entered Stage 3 for the main event. 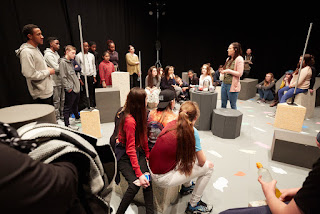 The What Once Was Ours set consisted of a number of large foam bocks and the audience was asked to sit on and around the set and the action took place around us. This was 360o theatre indeed.  Callum (Jaz Hutchins) appears on the set asking for directions from the audience. He finds the house that he is looking for and Katie (Pippa Beckwith) is at home. They share the same father and Callum wants to speak to him however his Dad is in . Over a cup of tea of lot of issues are discussed. Families are often strange and full of problems and it is no different here. 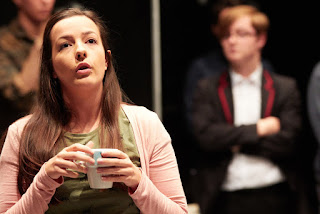 Issues of childhood, racism and abandonment are chewed over and even a game of twister takes place in an emotionally charged show. Between the scenes recordings of the original interviews are played through the speakers that are around the set. They often make for uncomfortable hearing as the experiences of young people living in post-Brexit vote are delivered in such a straight fashion. This surround sound design by Guy Connelly helped make the space feel small and intimate 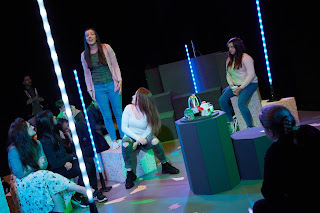 The lighting design by Phil Clarke included 4 tall poles that were able to flash in sync with the voice recordings played thus taking the place of the original speakers in the group.

There are some lighter moments in the show that bring some welcome relief. There are also those troubling moments in the script. The ex-pat living in who didn’t realise a vote for leave could ultimately mean they have to leave their Spanish retirement place or the mother who thinks tea is a British drink. 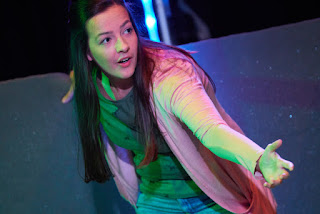 Pippa Beckwith and Jaz Hutchins skilfully interact with the set and each other even though the members of the audience are dotted around the stage. Director Toby Ealden gets a lively performance out of the two talented actors:  we see there is a relationship but it is under historic strain. 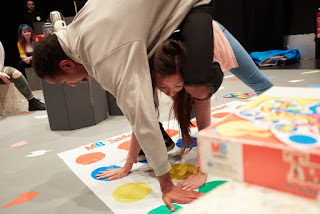 The elements of prejudice in Katie’s family are brought out into the open without much comment from Callum and that leaves it for the audience to make their own mind up. In this respect What Once Was Ours is an important piece about the British society that we live in today. The well produced show was both entertaining and thought provoking. It is a shame it wasn’t in town for a longer run.

Review by .
Photos by Phil Crow

Details of the remaining dates of the tour: https://zesttheatre.com/whatonce