'Tis the season to be...miserable as sin according to popular Geordie comedian, Gavin Webster. 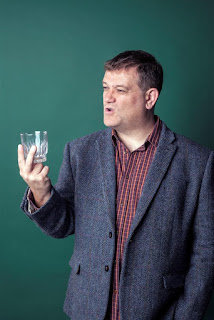 He's inviting North East audiences to delight in his misery by joining him at the Playhouse, this festive season to laugh their Christmas socks off.

From Secret Santa and the work's Christmas do, to the derisory bonuses that are just tax avoidance mechanisms from bosses, Gavin will let rip on all things festive. Family won't get away scot free either, with spoilt kids and fake relatives, Gavin paints a picture of Christmas that deserves to be thrown into Room 101. Or perhaps he's just a curmudgeonly old git - you decide.
Almost a thorn in the side of the 'safe' national comedy circuit, this fast-talking, banjo wielding anger merchant has charm and bonhomie by the tub load to offset the fury.

An hour of whipped up, high octane, frenzied, crash-bang-wallop with full support will make for an unforgettable yuletide night out with friends. An antidote to the arena comic, this is a must see, no holds-barred show.