SING-A-LONG-A BEAUTY AND THE BEAST WILL WEAVE DISNEY MAGIC AT THE CUSTOMS HOUSE
Sing-a-long-a Beauty and the Beast
South Shields Customs House
Sunday 15th October 2017
Disney fans can immerse themselves in the world of Beauty and the Beast when a unique cinema experience comes to South Tyneside. Sing-a-long-a Beauty and the Beast is calling at The Customs House on Sunday 15th October, as part of a national UK tour.
The smash-hit interactive show follows on from the phenomenon of Sing-a-long-a Frozen with this year’s live-action adaptation of the 1991 animated classic.
It features a live host, free prop bag, fancy dress and on-screen lyrics to songs like Be Our Guest, Belle, Gaston and the timeless Beauty and the Beast.
Ray Spencer, executive director of The Customs House, said: “You would have to have been abandoned on a desert Island for the last year not to know the story, which has enchanted and wowed audiences young and old since the film was released.”

In case you missed it, Belle (Emma Watson), a bright, beautiful and independent young woman, is taken prisoner by a beast (Dan Stevens) in its castle.Despite her fears, she befriends the castle's enchanted staff and learns to look beyond the beast's hideous exterior, soon recognising the kind heart and soul of the true prince hidden on the inside.
Ray added: “The film is full of wonderful songs, making it an ideal chance to sing your heart out with hundreds of other people. It’s the formula that has made the Sing-a-long-a phenomenon so popular around the world.” 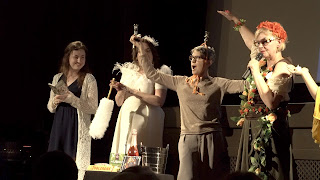 Sing-a-long-a Beauty and the Beast is an irresistible celebration of this wonderful family film, full of tears, laughter and magic moments. The host starts with a live pre-show, warming up voices, teaching hand actions, and demonstrating the use of the props bag for key moments during the film.
This is followed by a fancy dress competition, where those who have dressed up get the chance to show off their outfits before the film starts.
Tickets:
Sing-a-long-a Beauty and the Beast starts at 3pm and tickets are £16 for adults, £11 for children, £35 for one adult and two children and £48 for a family (two adults and two children or one adult and three children).
Contact the box office on (0191) 454 1234 or book online at www.customshouse.co.uk.
Posted by North East Theatre Guide at 19:45