COMING OUT OF THE ZOO AND HITTING SUNDERLAND EMPIRE STAGE
Madagascar – A Musical Adventure
Sunderland Empire
Tuesday 28th August – Saturday 1st September 2018
TICKETS ON PUBLIC SALE 10AM, FRIDAY 20 OCTOBER 2017
Go Wild! as Selladoor Worldwide and Hartshorn - Hook announce that their brand-new stage adaptation Madagascar – A Musical Adventure is coming out of the zoo and hitting the Sunderland Empire stage from 28 August – 1 September 2018 as part of a new UK tour. 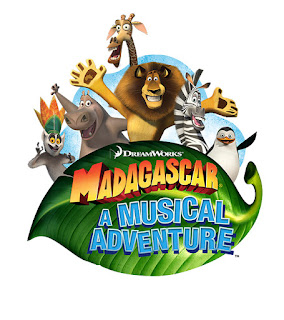 Join Alex the Lion, Marty the Zebra, Melman the Giraffe, Gloria the hip hip Hippo and, of course, those hilarious, plotting penguins as they bound onto stage in the musical adventure of a lifetime.
Based on the smash DreamWorks animated motion picture, Madagascar – A Musical Adventurefollows all of your favourite crack-a-lackin’ friends as they escape from their home in New York’s Central Park Zoo and find themselves on an unexpected journey to the madcap world of King Julien’s Madagascar.
Alex the lion is the king of the urban jungle, the main attraction at New York's Central Park Zoo. He and his best friends – Marty the zebra, Melman the giraffe and Gloria the hippo – have spent their whole lives in blissful captivity before an admiring public and with regular meals provided for them. Not content to leave well enough alone, Marty lets his curiosity get the better of him and makes his escape – with the help of some prodigious penguins – to explore the world.

This wacky adventure for the whole family is brought to life by Selladoor Family, the producers behind James And The Giant Peach, Seussical and The Owl And The Pussycat and Hartshorn – Hook, producers of the Olivier Award winning Rotterdam, Murder Ballad, Urinetown and American Idiot . Madagascar – A Musical Adventure will be directed by award winning Kirk Jameson who is thrilled to be working alongside Selladoor again having directed their 2013 revival of Seussical: The Musical at the Arts Theatre.
David Hutchinson, Executive Creative Producer of Selladoor says “One of our key principals at Selladoor is to aim to engage young people to come to the theatre and to help to encourage a whole new generation of theatre-goers, and Madagascar promises to do just that. We are delighted to be bringing these much-loved crazy characters to life on stage in an exciting caper for all of the family”
Filled with outlandish characters, adventure galore and an upbeat score, Madagascar will leave audiences with no choice but to “Move It, Move It!”
On The Web:
Twitter @MadUKTour
Facebook https://www.facebook.com/Madagascar-UK-Tour-2769884936558881/
Tickets:

Tickets available in person at the Box Office on High Street West, from the Ticket Centre on 0844 871 3022* or online from our affiliates ATG Tickets *