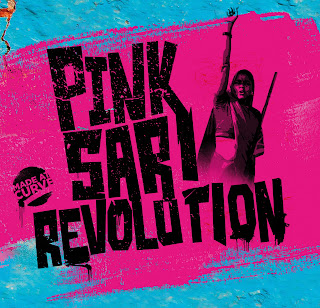 Book by: Amana Fontanella-Khan Stage adaptation by: Purva Naresh
Director: Suba Das; Designer: Isla Shaw
Movement Director: Aakash Odedra; Lighting Designer: Tim Lutkin
Musical Director: Naren Chandavarkar
Co-produced by: Curve, Leicester; Belgrade Theatre Coventry and West Yorkshire Playhouse, Leeds In association with: English Touring Theatre
Curve, Belgrade Theatre Coventry and West Yorkshire Playhouse, in association with English Touring Theatre have revealed the cast and production team for the world premiere of Pink Sari Revolution, a stage adaptation of Amana Fontanella-Khan’s critically acclaimed book of the same title.
Pink Sari Revolution, which comes to Northern Stage for four performances on 2-4 November as part of a UK tour, tells the real-life story of Sampat Pal, leader of the notorious, working class feminist movement ‘The Gulabi Gang’. Based in India’s rural Uttar Pradesh province, the gang now numbers over 400,000 members in a part of the world where violence towards women is rife.
After directing hit comedy East is East and the world premiere of Ravi Shankar’s only opera Sukanya at the Royal Opera House, North East born director Suba Das makes a welcome return to the region. Suba said: “I’m thrilled to make my second trip home this year with Pink Sari Revolution at Northern Stage. It was so amazing to make and share East is East in Newcastle to such a phenomenal response!
Although this story of courageous women fighting for their rights in rural India seems a million miles away from the crazy Khan family in 70s Salford; it's another show that at its heart is about standing up for your rights and being proud of who you are. That's a theme across lots of my work and I hope we tackle it with as much heart in Pink Sari Revolution too. It's a darker, more political show but for those who loved East Is East's orange revolving set, expect some equally stunning and surprising staging...and lots of pink!”
Taking the lead role of Sampat Pal is Syreeta Kumar, an actor known for her frequent work with the Royal Shakespeare Company (RSC), as well as roles in television such as Apple Tree Yard and films including Notes on a Scandal.  The company will be completed by Goldy Notay (It’s a Wonderful Afterlife, Bend it Films and Handful of Henna, Sheffield Crucible), Munir Khairdin (Whitechapel, Carnival Films and As You Like it, Curve), Ronak Patani (Macbeth, National Theatre and Primetime, Royal Court), Sharan Phull (Romeo and Juliet, National Theatre and The Importance of Being Earnest, Curve) and Ulrika Krishnamurti (Made in India, UK National tour and Rockford, Sic Productions).
The production has been adapted for the stage by Indian playwright Purva Naresh, winner of the United Nations Laadli Media Award for her work on gender. Olivier award winner Tim Lutkin will provide the lighting design for the show, while longstanding Curve collaborator Designer Isla Shaw (The Importance of Being Earnest, Wipers, The Witches) will create the set and costumes.
Incorporating elements of traditional Indian music and dance, composition and Sound Design is by Indian Artist Naren Chandavarkar and Curve Associate Artist Aakash Odedra will provide movement direction. One winter’s day, Sampat Pal learns of Sheelu Nishad, a young girl thrown into prison in the dead of night. As Sampat investigates claims of corruption, theft and assault, a chain of events is set into motion that reveals the real cost of taking a stand.
Tickets:
For more information or to book tickets visit www.northernstage.co.ukor call the Box Office on 0191 230 5151.
Posted by North East Theatre Guide at 18:50