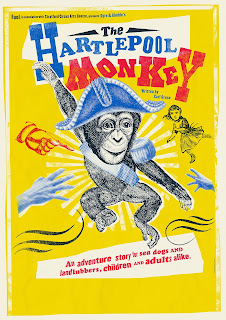 Hartlepool Monkey
Newcastle Northern Stage
Until Saturday 14th October 2017
Then on tour.
Written by Carl Grose
Created by Carl Grose, Finn Caldwell and Toby Olié
Co-directors Finn Caldwell and Toby Oliĕ, both originally from the North East, deliver a historic tale that resonates with the current political climate. It is a tale which will work with theatre goers young and old.
Young Clĕmence (Rebecca Collingwood) finds herself on a French ship heading to war with its French crew and a chimpanzee (controlled by Fred Davis). After drifting off course, and sinking a British trawler, they found themselves being blown out of the water by the old war hero Major Hornscrock (Rachel Sanders). Somehow they get ashore and find themselves in Hartlepool.
The North East town is suffering as a result of the Napoleonic Wars against the French. The town lacks money and young men. The town is run by elders such as Dr Cottrill-Bent (James Duke) and Preacher Pike (Baker Mukasa). These leaders feather their own nest whilst local businesses are struggling. They also get hysterical when the strangers appear in town. The future of the visitors is in the balance as they are taken in by pub landlord Eric (Jonathan Dryden-Taylor) and his son Billy (John Trindle). The question is posed about who can keep their head when all around them are losing theirs.
The show begins in song announcing that the monkey will be hanged which removed any doubt for any youngsters who are unfamiliar with the legend. The cast also point out that similar tales exist elsewhere in the world and there is no proof if or how these events unfolded. This gives writer Carl Grose a free hand on how to drive the tale forward. Clearly parallels can be drawn with the xenophobic, jingoism and fear that has been shown in recent years. The end product has elements of the successful tv series Horrible Histories and puppet based stage shows like War Horse or Lion King.
The puppetry is a major highlight of the show. Exquisite manoeuvres by the hairy star bring the character to life. It has been really well designed and up to 3 actors are needed to manipulate it.
Samuel Wyer’s set design is very busy. Ropes and Sails hang from above whilst the stage has numerous barrels. The set has to be a warship one minute and a bar the next and, with help from Matt Daw’s lighting design, it works.
Whilst it is not a musical, music by Adam Pleeth is an important feature of the piece. Some songs are sung and some atmospheric incidental music help to make the show very watchable.
The Hartlepool Monkey is a well acted, well produced show that follows a curious, and rather unpleasant, episode in this nation’s history. Aside from the facts around the monkey itself, the show examines the hatred that can be focussed on the people of another nation during times of war. To that end it deserves to be a success.
Review by Stephen Oliver
On The Web:
@GyrAndGmbl | #HartlepoolMonkey | www.gyreandgimble.com| fueltheatre.com | stratford-circus.com