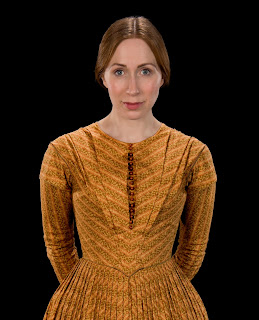 Struggling to think, live and love beyond the stifling expectations of duty, class and convention, governess Jane Eyre and Master Edward Rochester take a dark journey towards sensual and intellectual liberation.  Told through Jane’s eyes, English literature’s most celebrated autobiographical novel shocked the Victorians, and Charlotte Bronte’s gothic subversion of fairy-tale romance is now distilled for the stage – under its full title – by writer/director Elton Townend Jones.  Performer Rebecca Vaughan embodies everywoman Jane – and several other characters – in this intimate study of love’s realities.

Dyad Productions previous work includes Dalloway, The Unremarkable Death of Marilyn Monroe, Female Gothic, I, Elizabeth, The Diaries of Adam and Eve, Christmas Gothic and Austen’s Women.
Dyad Productions creates, produces and tours classic theatre with an innovative and contemporary emphasis.  This stage adaptation of Charlotte Bronte’s classic novel is Dyad’s eighth original production in as many years.  It premiered at Assembly Edinburgh in August 2016 to great critical acclaim and was No.1 in The List’s top-rated shows for theatre drama, and No.6 in the top-rated shows (out of over 3000).  Previous works, Austen’s Women and I, Elizabeth were five-star successes at Edinburgh and Adelaide in 2009/2010 and 2010/2011, with The Diaries of Adam and Eve, Female Gothic, The Unremarkable Death of Marilyn Monroe and Dallowaygarnering five-star reviews at Edinburgh between 2011-2015.  All eight Dyad plays continue to tour across the UK and internationally, while Austen’s Womenreturned to Edinburgh in 2013 for another highly acclaimed five-star run, as did I, Elizabeth in 2015.  The Diaries of Adam and Eve was published in 2013 (by StageScripts) and The Unremarkable Death of Monroein 2016 (by Samuel French).  Dyad Productions is Rebecca Vaughan and Elton Townend Jones.
Jane Eyre: An Autobiography is adapted and directed by Elton Townend Jones (writer/director: Dalloway, The Unremarkable Death of Marilyn Monroe, director: Christmas Gothic, writer/performer: The Diaries of Adam and Eve, script editor:Female Gothic).  It is performed by Rebecca Vaughan (writer/performer: Austen’s Women, Female Gothic, Christmas Gothic, I, Elizabeth, performer: Dalloway, The Diaries of Adam and Eve).  Costume designed by Katherine Newbury.  Lighting designed by Martin Tucker (Christmas Gothic, I, Elizabeth, Dalloway, The Unremarkable Death of Marilyn Monroe).  Sound design by Danny Bright (Dalloway, Christmas Gothic). It is produced by Rebecca Vaughan and Elton Townend Jones.
Tickets:

Jane Eyre: An Autobiography comes to Arts Centre Washington on Thursday 9 November, 7.30pm.  Tickets are from £9 and are available from www.artscentrewashington.co.ukor by calling 0191 561 3455.
Posted by North East Theatre Guide at 22:44