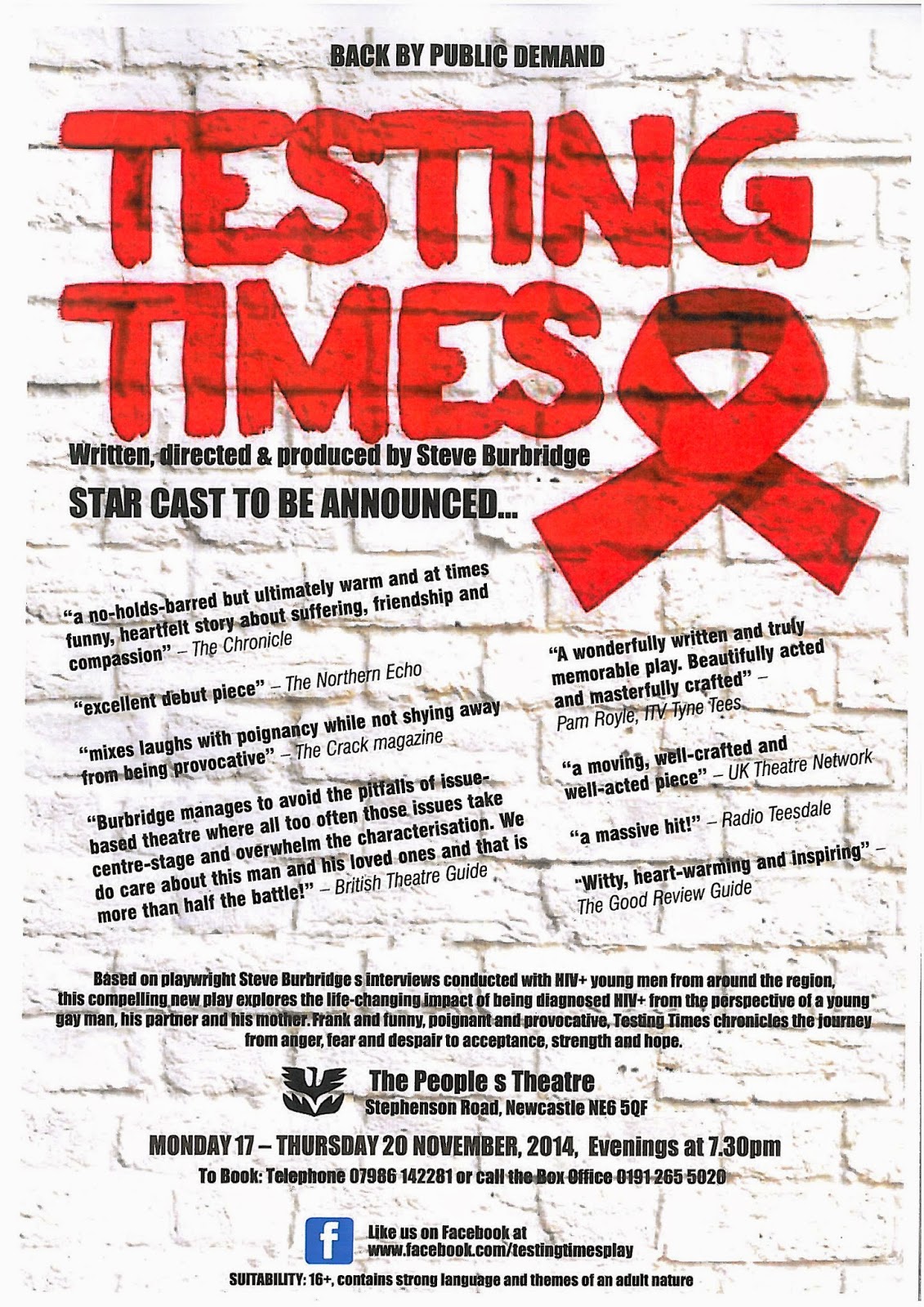 Back by public demand, Testing Times returns after a triumphant try-out run last year. Described as being “as witty and uplifting as Calendar Girls; as profound and engaging as The Vagina Monologues; and as moving and emotive as Blood Brothers”, the play received critical acclaim and inspired cathartic outpourings of emotion from audience members.
Based on playwright Steve Burbridge’s interviews conducted with HIV+ young men from around the region, this compelling new play explores the life-changing impact of being diagnosed HIV+ from the perspective of a young gay man, his partner and his mother.
·        Key Fact: 1,385 people have been diagnosed HIV+ in the North East of England (source: MESMAC North East, 2014)
Frank and funny, poignant and provocative, Testing Times chronicles the journey from anger, fear and despair to acceptance, strength and hope.
Testing Times visits The People’s Theatre for a strictly limited run of only four performances.
Even today, in the 21st century, those living with the chronic condition of HIV are all-too-often demonized in the popular imagination and Testing Times counters this very effectively without being preachy. Set in the context of a loving relationship and a family and showing the human cost of prejudice, discrimination and ignorance, the play resonates far beyond the LGBT community.
·        12,583 people have been diagnosed HIV+ in the North of England   (source: PHE – Public Health England, 2012)
Although the impact of a young man’s HIV+ diagnosis is at the heart of the piece, the play delves far deeper than that, exploring many of the issues associated with what it means to be gay in today’s society.
Being ‘different’ can be an isolating and, indeed, frightening experience. During the course of the play, we see the central character, Dominic, endure childhood ridicule from his father, unmerciful bullying from other boys at school, an apathetic reaction from teachers and even sexual assault.
·        Key Fact: 65% of gay, lesbian and bisexual pupils experience homophobic bullying at school – despite the fact that schools have a legal duty to prevent and challenge homophobic bullying and to ensure the wellbeing of all children and young people (source: The School Report, Stonewall, 2012)
In Testing Times we learn how he and his partner, Chris, met and of their happiness together, prior to Dominic’s first symptoms. When the diagnosis is given, we encounter the public and inner angst and fears of all three characters: Dominic, Chris and Brenda (Dominic’s Mum). Through rows and recriminations, arguments and accusations, we witness the tumultuous – but ultimately loving relationship – between all three. Your heart will reach out to Dominic, whose sexual transgressions are minor on a scale compared with some heterosexual men. He is not stereotypically promiscuous, he is unlucky.
·        Key Fact: There are approximately 1,000 young people under 18 accessing HIV care in the UK (source: NAT – National AIDS Trust, 2013)
Nevertheless, he is forced to deal with the harsh reality of the situation he finds himself in; to confront his own mortality; to question the purpose and meaning of his very existence; to find a reason and a way to make life worth living.
Testing Times is not merely a ‘gay play’, nor is it just a piece of ‘issue-based theatre’. It is a moving and well-crafted piece that could pertain to any family with a loved one dealing with a life-threatening condition.
·        Key Fact: More than 20,000 people in the UK don’t know they are HIV+         (source: Terence Higgins Trust, 2014)
The play features the talents of Christopher Strain as Dominic whose professional theatre credits include Les in East (Customs House), Dr Spivey in One Flew Over the Cuckoo’s Nest (Customs House), tours of Oliver Twist and A Christmas Carol and Lt. William Avery in We Got Mittens Too! (November Club; 2008 Newcastle Journal Culture Award for Performance of the Year). He has also appeared in various features and short films (including the BAFTA-nominated I am Nasrine), as well as writing, directing and performing in his own one-man play, Diary of a Madman.
With Christopher is Colette Kelly as Brenda who has appeared in the West End in the Wind in the Willows, followed by Salad Days both at the Duke of York’s Theatre. More recently, By the Bog of Cats at the Wyndhams Theatre, Siveat the Riverside Studios, and as the Duchess of Berwick in Lady Windermere’s Fan. Having performed the role of Pvt. Henry Stevens in critically acclaimed Death at Dawn (Cloud Nine Theatre) in September this year, Jamie Brown is delighted to be performing in his native North-East once again as Chris.
On The Web:
Facebook: https://www.facebook.com/testingtimesplay?fref=ts
Tickets:
Adult £11.50 and £9.50 Concessions
Monday 17 – Thursday 20 November, 2014 at 7.30pm
The People’s Theatre, Newcastle upon Tyne, NE6 5QF
Tickets are available from Steve Burbridge or the People's Theatre Box Office. http://ptag.org.uk/
Telephone:  0191 265 5020
OPENING NIGHT OFFER - all tickets £9.50 for the first performance on Monday 17 November
Posted by North East Theatre Guide at 20:52