Preview: Mad About The Musicals at The Playhouse, Whitley Bay 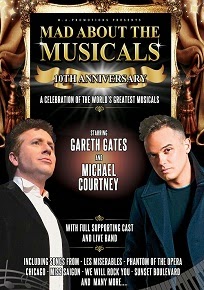 The Playhouse Whitley Bay is delighted to announce Mad About The Musicals starring Gareth Gates and Michael Courtney will be returning to The Playhouse on Wednesday 7th October 2015.
Taking you on a whistle stop tour from the heart of London’s theatre land to the glitz of Broadway, Mad About The Musicals is back once again, celebrating the very best songs from the shows we all know and love!
With a host of your favourite numbers from the pen of Rodgers & Hammerstein, Kander & Ebb, Andrew Lloyd Webber and Boublil & Schonberg, the talented cast of Mad About The Musicals will evoke the true spirit of the stage, with brilliant vocals, incredible dancing, stunning costumes and West End musicians to bring you the very best show in town!
From the poignant ‘All I Ask Of You’ to the dramatic ‘One Day More’, you can sit back and enjoy two hours of unforgettable London and New York favourites, brought to you by a cast direct from the West End, including Gareth Gates and Michael Courtney -  ‘A Pure Slice Of Entertainment’!
Hailed as ‘Outstanding!’ by the Stage, ‘The best show of its kind’ by Encore Magazine and nominated The UK ‘Producer of the year’ this is one definitely not to miss!!
Tickets:
Tickets are priced at: £18 - £22
Playhouse Whitley BayBox Office (10am-4pm weekdays, 10:30am – 2:30pm Saturdays and Event days.)
Internet Site: www.playhousewhitleybay.co.uk
Group Bookings should call 0191 2606006
Accessible bookings should call 0191 2515484
Posted by North East Theatre Guide at 13:29