Whitley Bay's Playhouse is host to the Whitley Bay Panto Society who have been performing panto in these parts for 54 years. They had not, until this year, done Snow White despite its popularity. 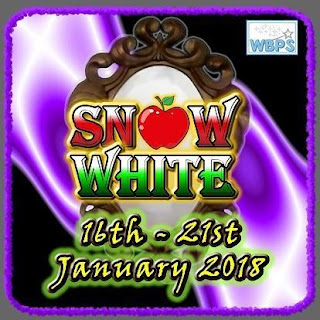 A large cast present the Brothers Grimm tale with a script from society president Steve Arnott. This is a traditional panto with many of the features that you expect from the format. Custard pies fly in the wet scene and classic jokes put in a regular appearance too. Director Steven Bell has not the made the mistake of letting some scenes drag on and that has help keep the pace suitable for the younger members of the audience.

The tale begins with Prince Richard (Sabrina Lyall) arriving in town to find a bride and he wants to rekindle his friendship with old school friend Princess Snow White (Ellie Naseby). The only trouble is Queen Lucretia (Lauren Peters-Jones) has other plans and she unleashes her henchmen Snotbaĺl (Mark Robinson) and Slimeball (Robert Wilson-Baker) to resolve the issue. On Snow Whites's side is the Forest Fairy (Leah Ashton) and seven dwarfs who seek refuge from the Queen in the dark woods. Complicating matters is her best friend Muddles (Davie Linsdell), who also wants to marry her and Nurse Gertie (Austin Davey) who has looked after her needs when her evil step mother doesn't. It is the day before Snow White' s birthday and things come to a head.

It was first night and a few nerves were kicking in at the start. That said, sometimes a few laughs can be had from a mistake in the script.

One of the notable features in this production was the quality of the dancing from the three groups of youngsters. They were enthusiastic and well-rehearsed for each of the routines. Choreographer Julie Cockburn has come up with a number of pieces at regular intervals throughout the show. I did ponder on whether there were slightly too many dancing interludes, and a bit of time could have been trimmed off the 2 ½ hour show, however they were delightful to watch.

The other notable feature of this version of Snow White were the delightful seven dwarfs. In this particular production they are performed by seven young girls who had a fair bit of dialogue and comedy to deliver and they were enjoyable.

The show also features a six-piece live band, rather than the use of backing tapes, of which we always approve.  Musical Director Andrew Clarence had his working cut out at times, especially during the community singing but the band remained professional throughout. Andrew also appeared on a big screen as the person in the mirror – I cannot recall the MD taking such a role before.

One stage the chemistry worked well between Snow White and the Prince, and between Snotball and Slimeball. The latter pairing were criminally underused and pushed a level of energy into the show each time that they appeared. Mark Robinson and Robert Wilson Baker had comic timing which each routine and have been one of the best comic henchmen double acts from this year’s panto season. Likewise Ellie Naseby was charming in the titular character and both she, and Sabrina Lyall, had opportunity to show their singing skills.

The Forest Fairy appeared with a flash and Leah Ashton was able to hold her own as the rhyming guardian. By the same token Lauren Peters-Jones was sufficiently vile as the evil Step-Mother of Snow White.

Each of the elements were in place for a traditional panto. There was the take-off scene, which had the young kids happily screaming “it’s behind you!” and the community singing led by Dave Linsdell and Austin Davey. Tonight was a tough cold post-Christmas Tuesday night crowd but, given the cast credit, they didn’t give up.

The show is a cost-effective way of taking your family to the panto and the show remained younger-child friendly throughout. The jokes in the Steve Arnott script didn’t descend into the crude and vulgar. I’m sure that the production will be cooking on gas by the end of the week.