Preview: Go Back for Murder at Newcastle People’s Theatre

Who is in the frame for the murder of Amyas Crale? 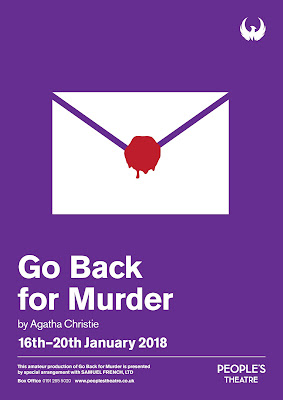 All the tinsel from their latest record-breaking Panto has been swept up and they start the New Year with our traditional January winter warmer, Agatha Christie’s whodunit Go Back for Murder.

“Take what you want, but pay for it.”
Carla le Marchant wants to know who killed her philandering artist father Amyas Crale.

Her mother went down for poisoning him and died in prison, but a letter she left for Carla swears her innocence. Enlisting the help of young solicitor Justin Fogg, Carla reassembles the suspects at her childhood home on the South Coast, determined to find out what really happened.

In an unusual departure from her traditional murder mysteries, Christie’s uses flashbacks to slip seamlessly between the present of 1952 to the past of 1936, examining the danger of relying on personal testimony warped by time, prejudice, and perception. The inconsistencies between each suspect’s testimony reveal a disturbing and terrible truth.

Adapted by Christie herself from her Hercule Poirot novel Five Little Pigs, the Queen of Crime cut the Belgian detective from the theatrical version, preferring to open up the possibility of romance by introducing Fogg, the charming young lawyer and amateur sleuth, into the mix. The result is a classic whodunnit, with all of the ingredients skilfully blended together to create the perfect mystery.

Following in the footsteps of Murder on the Nile (2016) and The Unexpected Guest (2017), their annual January thriller has become an unmissable and much-loved feature of our calendar.