Queen's Hall Arts once again has a packed new season of drama, live music, dance, film, exhibitions and much more… 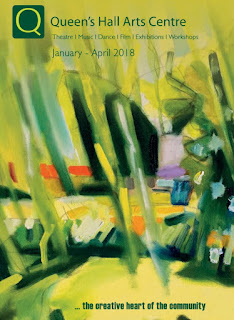 Artistic Director, Geof Keys says ‘Welcome to our new season at the arts centre. We’re pleased to be supporting a great variety of art and entertainment to ward off the winter chill and launch into Spring.

The drama programme spans a huge range of work that started nearly 2,500 years ago with Medea to the latest incarnation of The Chef Show with a guest appearance from Saathi’s. In between there’s everything from Steptoe and Son to John Godber and lots of fun for our younger audiences.
Our musical offering is also broad with monthly classical music concerts and a range of modern work celebrating the Police, the Four Seasons, James Taylor and Carole King. There’s also a strong folk programme with monthly White Room gigs and main theatre shows from Knight & Spiers and Aly Bain & Phil Cunningham.

The dance programme is particularly exciting with our commissioned work from Kelly-Abbott Dance (which you can be in!) and the latest from the Northern School of Contemporary Dance.

And if there’s one show you should definitely not miss this season it’s Leviathan on Tuesday 13 March. I saw it at the Blackpool Grand last year – absolutely stunning!’