After more than 20 years at the helm Geof Keys, Artistic Director of the Queen’s Hall Arts Centre, Hexham is stepping down this summer. During his time at the arts centre he has led some big changes.

In 2001 Queen’s Hall Arts was set up to take the local arts service out of direct local authority control. The new charity quickly raised the funds for major building works, creating gallery spaces, improving access and renovating the theatre. The rather daunting public building that housed a theatre and a library has become a welcoming multi-purpose arts centre and local services hub. 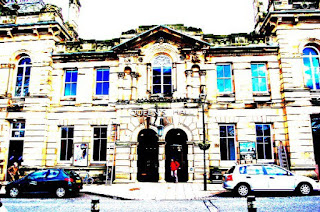 It has been a period of growth and development for the arts with an expanded programme of professional work alongside a commitment to community activity – and not just at the Queen’s Hall. Some of the work Geof is most proud of has been across Northumberland – establishing the Highlights rural touring scheme, supporting local film clubs and playing a leading role in Bait, the Creative People & Places programme in SE Northumberland. Overall
engagement numbers for the service have risen from 29,000 in 2001 to over 87,000 in 2017.

He says “20 years is an extraordinary length of time to be doing this job.  I am deeply grateful to the QHA staff and board (and to the artists we support and the community we serve) for making it a pleasurable and satisfying experience – notwithstanding that it can be hard work at times!  I believe that now is the right time for me to move on and also the right time for the organisation to refresh itself under new leadership, cushioned by the new agreements we
have with our core funders, Arts Council England and Northumberland County Council, and a building fit for purpose.”

Geof is planning to stay in the area developing a range of new projects to support North East based artists and companies.
Posted by North East Theatre Guide at 21:24