Happy new year! Have you made any resolutions? Mine was to do more comedy and music gigs in 2018 and so the year begins with a comedy show with a fair bit of music thrown in. Lee Kyle was starting a tour that will cover over 30 nights and end in his home town with a show at the 400-seater Customs House in South Shields. 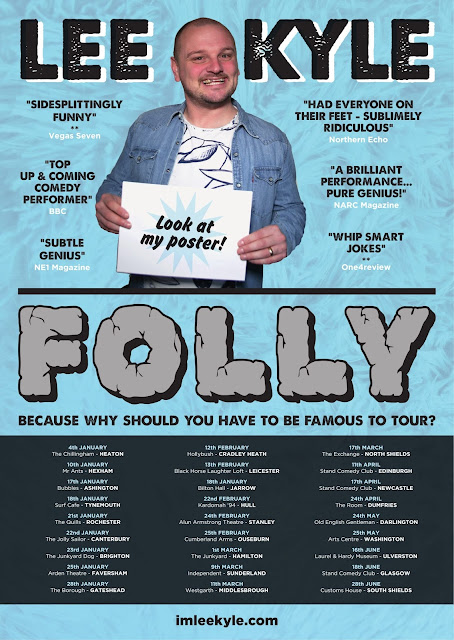 A wet and wild Thursday night found us upstairs above the Chillingham Arms. A nice pub with a wide range of beers at reasonable prices. Despite the weather and the fact that the students were still on holiday, the room was half full. The added bonus was that this was a good comedy crowd who were here for a good laugh and it made for a very good atmosphere.

First one stage was the lively Sammy Dobson. Her fast paced delivery was sometimes bordering on the psychotic however it led to many laughs throughout her set. We had the contrast between the life of a single person and the joys of being in a couple with a bit of healthy feminism thrown in for good measure. In common with each of the acts, the honesty of the presentation made Sammy very endearing to the Newcastle audience.

The second half of the show finished with Joby Mageean who appeared with two ukuleles though he only played one funny song before cracking on with a very funny set. It is easy to see how he was recognised with the Leicester Square new act of the year award at the end of 2016. Smart observations left the room in a good humour before the interval.
Lee Kyle started his UK Tour in an attempt to answer the question "What happens if you do a tour while not actually being famous?"  The show had begun with an introduction for the documentary that he is making. So whilst he has written a book about wrestling ‘Spandex Ballet – How I Wasted My Twenties Wrestling’, he has yet to be seen on television. Judging by the quality of his show this evening it must only be time before the affable comedian gains a higher profile. 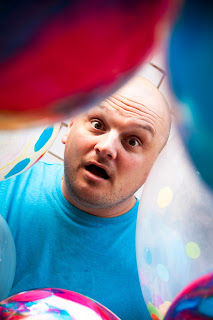 Lee Kyle may have been on the first night of the tour, but this is the show that he performed at the Edinburgh Fringe in 2017 so it is already a finely tuned production. The lad from Jarrow has built in elements of music into his routine which were hysterical as he pointed at the audience and then inserted random different lines or changed the contexts during a well conceived musical interlude. Indeed, Lee does a lots of pointing as he dances!

A lot of thought has gone into the structure of the set as some of the earlier jokes come back later on for a big payback moment. Who would have thought that gloves and the choice of fizzy drink could become part of a funny routine?

Lee’s set works well as he is a likeable and personable chap who is willing to make fun of his own shortcomings rather than picking on the audience. The surreal elements make the show distinctive. Lee was able to regularly fill the room with laughter and the set was much better than the bulk of the comedy that we had witnessed on our last trip to Edinburgh.

This is an entertaining show that is well worth catching on its trip around the country and it’ll cost you less than the booking fee that you’ll pay for certain comics that appear on the TV but are, to be frank, not that funny.