It's our final weekend of panto reviews. (Who said "oh no, it isn't?) We are back at the quaint Westovians Theatre for Tom Whalley's Aladdin and director Gareth Hunter has added a sprinkle of panto magic to the joke filled script. It may be billed as an amateur show, and it may be less than a quarter of the cost of some shows, but it is a real cracker. A strong cast featuring proper talented singers deliver pun after pun. After all, everyone loves a Greatest Hits album and this feels like pantos greatest hits. No wonder it has already sold out many of the performances. 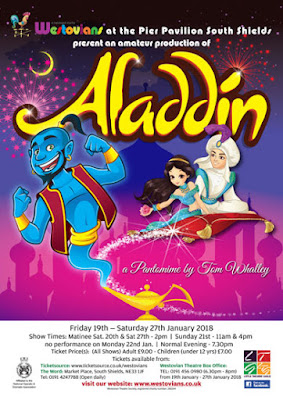 Hang on regular readers will say. Wasn't there a Tom Whalley scripted Aladdin last year in Gateshead? Indeed there was and as the cast start with the adapted version of Madness’s Night Boat To Cario we found ourselves on familiar territory.  But fear not as we enjoyed it back then and like a rerun of a favourite movie, we were likely to enjoy it again.

This is a classic telling of a panto staple. Abanazar wants to be the most Master of the Universe.  He calls up The Slave of the Ring to find out the solution. He must go to the village of Won Long Poo in China to find the boy who can enter the Cave of Canny Things and retrieve an enchanted lamp. The Genie of that lamp would then grant 3 wishes and hence world domination becomes a formality.

The lad in question is Aladdin who lives with his mother Widow Twankie and his brother Wishy Washy. They run a laundry though in this version it gets sold and they enter the take away business. Perhaps there are more food jokes compared to laundry quips.

Some pantos this season have given big musical numbers to people who have struggled.  This version of Aladdin differs from the bulk of shows as the majority of the singing was handled by local singing sensation Jen Stevens and by award winning singer Lori Smedley. As a bonus, their voices harmonised well together in duets. This show seemed to get the balance right by not packing in pointless songs just to pad the running time out. Backing the songs are three teams of young dancers who were very enthusiastic each time that they performed a routine. They also doubled up as the police force chasing Aladdin around the venue.

It was opening night and there was an element of surprise on occasions as the cast experienced the audience's reaction to the lines they've been rehearsing. This was nice as the audience were reacting to the cast’s feedback. 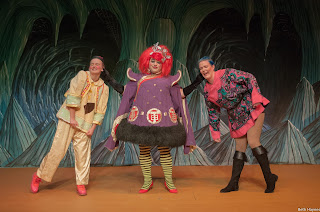 The Dame, David Foster, took control of both the stage and audience and helped break the fourth wall. The result was a friendly show in which the audience very much felt a part of the action.

The comic has to be the children's friend and Katie Reed had the younger members of the audience happily joining her gang. She didn't play the role of Wishee Washee as someone who was immature and the result was someone who is well meaning and easier for the kids to relate to. 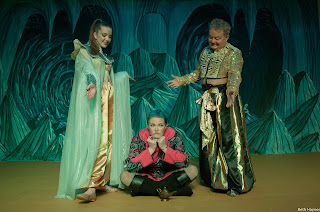 A mark of a successful bad guy is the reaction during the curtain call. The wave of booing over the applause indicating Rosie Diaz had done a fine job as the evil one. We have witnessed Abanazar, in other productions, getting side-lined as merely a character to wheel on in front of the curtains during scene changes. By better integration into the main plot, the traits of the evil one makes more sense.

Whilst comparing Aladdin productions, this show also makes a welcome omission of daft police in a central role and of poorly judged racist jokes. There are still plenty of terrible puns that everyone will get and some near-the-knuckle jokes that the kids will hopefully not understand.

Aladdin is a magical show and this is helped by the humour and grace of Holly Chinneck and Stan Hunter's performances as the Slave and the Genie respectively. If this is the first experience of theatre for the younger members of the audience then hopefully they will want to return soon. Panto, after all, is often many theatre lover's first experience of theatre. This is why it is so important to get it right.

It may be cheap (Coffee £1/ice cones £1!), it may be amateur but do you know what? Aladdin is one of the highlights of this season's panto season. 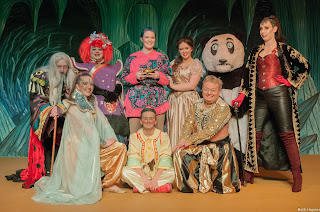