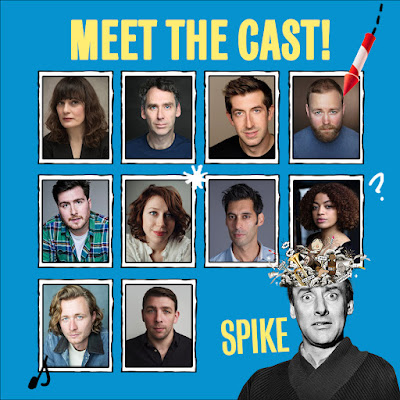 Full casting has been announced for ‘Spike’ - the comedy by Ian Hislop and Nick Newman that had its world premiere at The Watermill Theatre Newbury in January, and will be touring the UK from 6 September.

Robert Wilfort (Gavin and Stacey, Bridgerton) will take over the role of ‘Spike Milligan’, Patrick Warner (‘Peter Cook’ in The Crown, One Man, Two Guvnors and Play that Goes Wrong) will also join the production to play ‘Peter Sellers’, and Jeremy Lloyd (The Comedy About a Bank Robbery, Trial by Laughter) will return to his critically acclaimed role as ‘Harry Secombe’

TV comedienne and podcaster Margaret Cabourn-Smith (Motherland, Miranda, Buffering) will reprise her role as ‘Janet’, as will James Mack (The Watermill’s The Hound of the Baskervilles, The Rivals, Macbeth and Journey’s End) as ‘Denis Main-Wilson / Peter Eton’,  Ellie Morris (The Play That Goes Wrong, Mischief Movie Night, The Comedy About A Bank Robbery for Mischief Theatre company) as ‘June’, and Robert Mountford (The Habit of Art, The Haunting of Alice Bowles for Original Theatre Company, House and Garden for The Watermill) as ‘BBC Executive’.  Peter Dukes will join the company as ‘BBC Announcer’, as will Tesni Kujore as ‘Myra’, and Sam Ducane as ‘Doctor’.

Ian Hislop and Nick Newman said, “It’s a privilege to take ‘Spike’ on tour, exploring the genius of Britain’s most inspirational and ground-breaking comedian. And of course, it’s another chance to steal all his jokes and pass them off as our own. Spike Milligan may be Goon, but he’s not forgotten.”

‘Spike’ runs at at Darlington Hippodrome from Tuesday 18 to Saturday 22 October. For full details or to book please call the Box Office on 01325 405405 or visit www.darlingtonhippodrome.co.uk