Original Theatre are delighted to announce the full cast of their brand new production Agatha Christie’s The Mirror Crack‘d. The production, directed by Philip Franks, comes to Darlington Hippodrome in September. 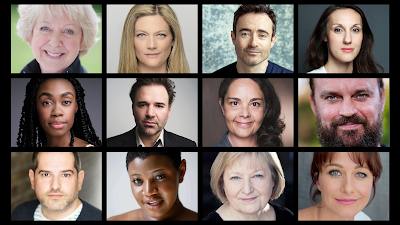 The final members of the cast to be announced are Oliver Boot as Chief Inspector Craddock, Lorenzo Martelli as Guiseppe Renzo, Chrystine Symone as Lola Brewster and Holly Smith in the ensemble.

Oliver Boot’s theatre credits include The Curious Incident of the Dog in the Night-Time for the National Theatre’s UK and International Tours, Finding Neverland, Oliver! And Piaf at Leicester Curve, Antony and Cleopatra, A Midsummer Night’s Dream, Timon of Athens, King Lear and Richard II for the Globe Theatre, and an award-winning world tour of Othello for Cheek by Jowl. On television, Oliver played Ben Woodman in the BBC’s Holby City.

Chrystine Symone’s theatre credits include Megan in The Girl on the Train (Upstairs at the Gatehouse), Fay Apple in Anyone Can Whistle (Southwark Playhouse) and Lamplighter/Understudy Gloria in The Magician’s Elephant (RSC).

In 1960s England, a wind of change is blowing through the land. It has even reached the sleepy village of St Mary Mead. There’s a new housing estate, which alarms the villagers as much as it intrigues them and, even more unsettling, a rich American film star has bought the manor house. Jane Marple, confined to a chair after an accident, is wondering if life has passed her by. Then there is a shocking murder, and Miss Marple must unravel a web of lies, danger and tragedy.

The Mirror Crack’d runs at Darlington Hippodrome from Tuesday 20 to Saturday 24 September. To book call the Box Office on 01325 405405 or visit www.darlingtonhippodrome.co.uk.