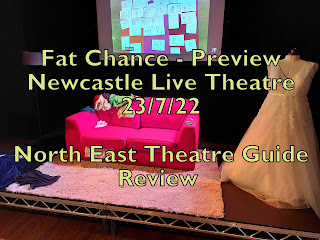 Fat Chance is a very personal journey into survival in today's society and not fitting in. Rachel is a female size 18 actor from the North East. As an acting agent once told her: you can only be 2 of those if you want to make it.

There is a lot of Rachel in this story: growing up,  dieting, training as an actor and the struggle to get parts when, for example, you refuse to move to London and change accents.

Rachel is very engaging and that is essential for a one person show like this. I say one person show but she shares the stage with a standard lamp that doubles as her partner. The lamp flashes as he speaks. We are also informed that he is amazing as he agrees to head into Middlesbrough for a parmo.

The story is as much about being from the North East as it is about being size 18. We have the emo phase and the chav phase as young Rachel search for her identity growing up.

Whilst opportunities for acting may have increased for ethnicity and sexuality (though far from perfect) there is still limited representation for large ladies and for North East accents. That lack of representation is significant to this show.

The show goes down really well with the Newcastle audience but I do wonder if it will translate when it appears in Edinburgh.  It is a while,  for example,  after the first mention of the parmo before Middlesbrough's delicacy is uncoded. Likewise,  the phrase 'PGCE' is not that well known unless you have a room full of teachers who have completed the course.

Rachel puts her heart and soul into the performance and she makes many valid points. For the audience, there are laughs and points to join in, though I felt for the woman in the front row who had to hold a cake for half of the show.

This show is the antidote to crazy diet plans.

To show your support and donate to the ‘Get Fat Chance to the Fringe’ campaign visit www.gofundme.com/f/get-fat-chance-to-the-fringe.