The North East has a wonderful comedy scene with a rich variety. This show featured two very different acts that had the crowd laughing.

Lauren Stone keeps popping up at shows - even when we went to a comedy night in Leeds! As one of the hard working acts in the region, Lauren is developing into a fine comic. Her style is nothing like anything that you see on television, but she harnesses her strengths to create something that is refreshingly different.  Tonight delivered the best set that we have witnessed to date.

Whereas we keep tripping over Lauren, Your Aunt Fanny have been elusive for us. Since their early beginnings at Live Theatre we keep wanting to see them in action but something happens every time. Even last weekends show at Live Theatre continued that bad run for us. Thus, when we saw that they were going to do a couple more Newcastle show we were keen to book tickets. 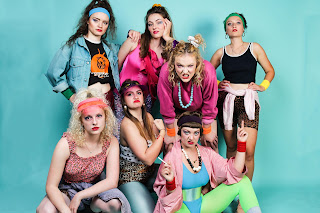 Your Aunt Fanny is a comedy troupe with seven talented members. Their new show 'Muff Said' is a sketch show in which each member gets an equal share of the time in the spotlight. The sketches are well crafted and flow nicely. There is clever word play, skillful acting and sharp observation. From the first sketch about the letters to a teen agony aunt through to the final skit, there are funny observations.

The sketches work as the audience recognise the point been made, from the token woman in the discussion panel getting limited opportunity to talk through to hen nights and office politics.

I'm glad that we finally got to see them in action. I'm sure that they have the potential to do well in the future. Not only are they an exciting prospect for the future, they are also well worth checking out now.

Your Aunt Fanny will be taking the show to Edinburgh Fringe - appearing on Aug 4-14, 17-27 at Edinburgh Assembly Rooms: https://tickets.edfringe.com/whats-on/your-aunt-fanny-muff-said