A cleverly constructed farce that still has audiences laughing 62 years later. Set in a Paris flat, which is located next to the airport, Boeing Boeing is a fast paced comedy that has plenty of twists and turns.

John Dorney appears as Bernard, a Frenchman that organizes his love life with mathematical precision. Armed with a timetable covering international flights he is able to maintain not one but three relationships with the support of his maid Bertha. MIchael Cabot directs the show in which Jo Castleton is able to present Bertha in a style that would not be out of place on a Victoria Wood sit-com. Whilst she efficiently removes any trace of the previous lover - even down to changing the photographs around, she does so whilst expressing how put out she is. Yes, she does mind at cooking another “pancake with black stuff on it” for American TWA air hostess Gloria. Isobel Della-Porta is loud and brash as she cuts it fine leaving the flat in order to fly across to San Francisco.

With Bek Palmer’s set and costume design everything is colour coded. Gloria, working for TWA, dresses in red and even has a red frame on her photo.  The colour palette for the flat in neutral in respect of the loves in Bernard’s life but looks typical for the period. Orbiting the space are 3 rings symbolising the three ladies flying long distance. 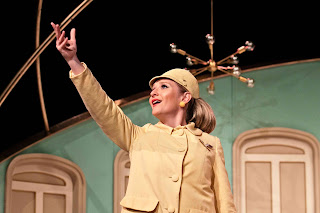 Adding to the chaotic life, and variety to Bertha’s menu, are Nathalie Barclay as blue Air Italia hostess Gabriella who is full Italian charm and Jessica Dennis sauerkraut loving yellow Lufthansa hostess Grechen from Germany. Each one is very different in personality but each wants to spend time in the flat as they take a break from work during their Paris layover.

Everything runs efficiently until the perpetual motion machine that is Robert arrives unannounced. Once on the set Paul Sandys’ character is almost an ever present as the fun riot kicks off around him.   Robert is an old friend from Bernard’s past who has come up from the provinces with a view to relocating in Paris. Bernard offers him a chance to stay. After all, it is a spacious flat for one person with its seven doors leading to bedrooms, bathroom and the kitchen. 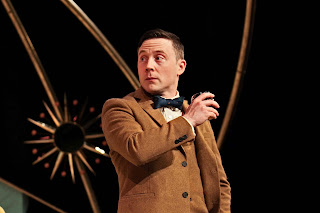 The problems start to build up as newer, more powerful Boeing planes start arriving ahead of schedule and weather causes chaos to the Atlantic travel schedule. Whilst Bernard is able to cope with some overlap he is usually pushing his luck. 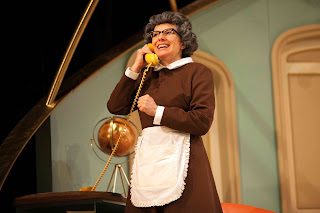 Theatre is the natural home of farce. That element of live action without the benefit of a retake means that the cast has to be skillful with their timing. Whilst such productions may be rare on the scene these days, the likes of Play Goes Wrong and Mischief's later bank robbery comedy show that there is an appetite for well worked shows. This is such a tight comedy that was well worth our long run down to Darlo. My companion commented that the Beverley Cross and Francis Evans translation of Marc Camoletti’s script had no awkward moments that had dated badly. This probably explains why the show is in the Guinness Book of Records for being the most performed French play throughout the world.

The two hours (plus interval) flew by as you were never sure what would happen next. You don’t find yourself judging any character even if they are a bit stereotypical of their respective backgrounds. Likewise one needs to ignore the accents (or lack of) and strap yourself in for a fun-filled rollercoaster of a show. The show is tightly directed and contains a skilled cast that have flawless comic timing. Of course the downside of that is the cast make the production look easy to deliver.

Boeing Boeing plays at Darlington Hippodrome from Tuesday 26 to Saturday 30 July. To book call the Box Office on 01325 405405 or visit www.darlingtonhippodrome.co.uk