A comedy legend will join the cast of a County Durham pantomime for a magic carpet ride this Christmas.  Tommy Cannon is set to star as The Emperor in Empire Consett’s production of Aladdin from Thursday 1 to Saturday 31 December.

Highly regarded for his infamous partnership with Bobby Ball, Tommy was half of one of the nation’s best-loved double acts, enjoying success in sitcom, game shows, comedy shows, plays and pantomimes. Although Tommy has performed in 36 pantomimes over the years, Aladdin will be his first without Bobby, who passed away in 2020. 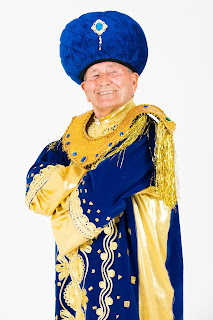 He said: “Fifty-eight years of being Cannon and Ball is not an easy thing to step away from. But after much deliberation, I decided to take on the mantle of His Royal Highness The Emperor Tommisso Cannonisso! I am looking forward to a fabulous Christmas season. I feel both nervous and excited, and I can imagine my pal Bobby shouting “Rock on Tommy” at me.”

Tommy will team up with Leah Bell, who once again returns to write, direct and star in this year’s production, in what will be her 11th pantomime in Consett.

An Empire Consett favourite, Leah will play one half of the Twankee sisters, with her on-stage sibling played by Jason Jones.

Packed full of magic, dazzling costumes and lots of adventure, Aladdin will bring a modern twist to the traditional story.

Cllr Elizabeth Scott, Cabinet member for economy and partnerships, said: “We are delighted to announce that Tommy Cannon will be joining us for a fantastic season of panto at Empire Consett. It’s an honour that Tommy has chosen our pantomime to be his first solo performance and there is no doubt that he will be given a very warm welcome.

“Aladdin will mark 11 years of Leah directing and producing the panto for Consett audiences and with her fabulous talent, we hope families are as excited as we are about the prospect of another action-packed evening of fun, mayhem and laughter this Christmas. It is also a brilliant opportunity to showcase the range of talent here in the county as part of our continued commitment to culture-led regeneration.”

Tickets are priced from £10 to £18, with school, family and group discounts available.

For more information or to book tickets, visit www.empireconsett.co.uk or call the Box Office on 03000 262 400.