The Sound Of Music
South Shields Customs House
Friday 26 August 2022 - Saturday 3 September 2022
Running for a limited season only at The Customs House, The Sound of Music remains one of the most popular musicals of all time. Set against the idyllic landscape of the Austrian Alps, this heart-warming tale based on a true story follows spirited young nun Maria and her relationship with the Von Trapp family. With a timeless score including Do-Re-Mi, My Favorite Things and Climb Ev’ry Mountain, this global phenomenon continues to enchant audiences across the world. 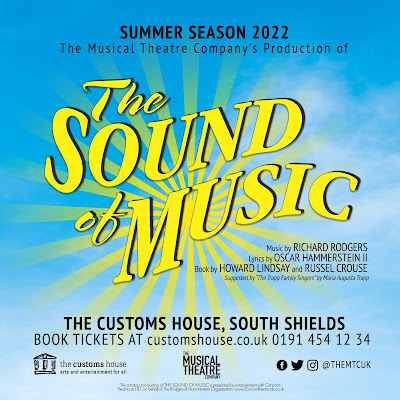 In the titular role is international performer Caroline Sabiston (Guildford School of Acting and An Evening with Sir Tim Rice) as Maria Rainer, alongside Andrew James as Captain Georg von Trapp and north east based soprano Sarah Fenwick (Sage Gateshead and Proms In The Park) as The Mother Abbess of Nonnberg Abbey.

The cast also feature Shannon O’Brien as Sister Berthe, Kenya Roberts as Sister Margaretta and Ella Bolton as Sister Sophia as well as an ensemble of talented performers.

The production team will include production management by Kevin Reay, direction and choreography by Adam Allinson and assistant to the director is Joseph Arnott. In addition to this, costume design by Lee Brannigan and Alan Graham Costumes, production technical management and sound design by Cameron Turnbull, lighting design by Glen Wood with set created by Proscenium.

With a timeless score including Do-Re-Mi, My Favorite Things and Climb Ev’ry Mountain, this global phenomenon continues to enchant audiences across the world.

The Sound Of Music will open at The Customs House, South Shields on Friday 26th August 2022 with a limited summer season ending on Saturday 3rd September 2022. Tickets are on sale now by visiting: www.customshouse.co.uk/theatre/the-sound-of-music/