Arriving at Sunderland Empire in September 2023 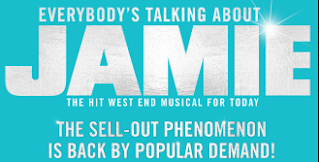 Jamie New is sixteen and lives on a council estate in Sheffield. Jamie doesn’t quite fit in. Jamie is terrified about the future. Jamie is going to be a sensation. Supported by his brilliant loving mum and surrounded by his friends, Jamie overcomes prejudice, beats the bullies and steps out of the darkness, into the spotlight.

This ‘Funny, outrageous, touching’ (Daily Telegraph), musical sensation is to be experienced by all the family and not to be missed!

With an original score of catchy pop tunes that will ‘blow the roof of the Theatre’ (Mail on Sunday) by lead singer-songwriter of The Feeling, Dan Gillespie Sells and writer Tom MacRae (Doctor Who), this ‘Sparking coming-of-age musical’ (The Times) will have everybody talking about Jamie for years to come.

Sixteen: the edge of possibility. Time to make your dreams come true.

Everybody’s Talking About Jamie will hit Sunderland Empire’s stage from Tuesday 19 – Saturday 23 September 2023. Tickets are available from the Ticket Centre on 0844 871 7615* or online at https://tinyurl.com/SUNDERLANDjamie *