The acclaimed BBC Big Band will be raising the roof of Darlington Hippodrome on Tuesday 10 April.

The band’s origins date from the earliest days of the BBC and the formation of the original BBC Dance Orchestra in 1928. This ‘golden’ period through the 1930’s saw not only the BBC Dance Orchestra, but many other bands including those of Billy Cotton, Geraldo, Joe Loss and Jack Hylton become celebrities, thanks in great part to the unrivalled reach of the new medium of radio. 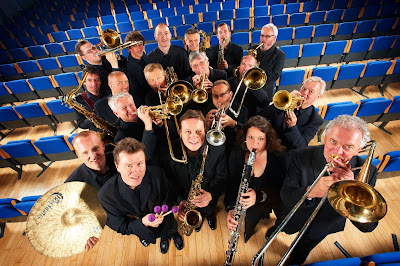 The band began to be used widely in the new medium of television, both in the company of home-grown talent including Matt Monro as well as with international stars such as Frank Sinatra and Nat ‘King’ Cole. By the 1960’s the band was known as the Radio Big Band and functioned as part of the larger BBC Radio Orchestra. However, in 1979, as a new series called Big Band Special began on Radio 2, the band’s profile was given a huge boost. Originally commissioned as a short run of twelve shows, the impact made by the BBC Big Band, now under the direction of Barry Forgie, ensured that the run was extended to 34 years before ending in September 2013.

The artistry and enthusiasm of the band in conjunction with some of the world’s great jazz composers such as Bob Brookmeyer, Abdullah Ibrahim and Michael Gibbs has achieved new levels of critical acclaim. The BBC Big Band is now widely regarded as the UK’s leading Big Band and has won the prestigious ‘Best Big Band Award’ at the British Jazz Awards eight times.

Tickets:
The BBC Big Band are at Darlington Hippodrome on Tuesday 10 April. For more information or to book call 01325 405405 or visit www.darlingtonhippodrome.co.uk