News: Beauty and the Beast at The Customs House

A THIRD OF TICKETS SNAPPED UP FOR SOUTH SHIELD’S PANTO
Panto fans have snapped up more than a third of tickets for Beauty and the Beast at The Customs House this year. The show is the follow up to The Lambton Worm which won the North East Theatre Guide’s “The Most Entertaining Pantomime” award for 2017. It was a hat trick for the Customs House team. 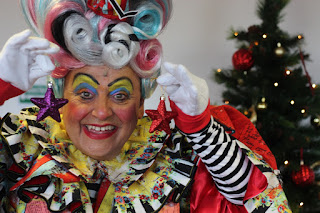 The title of this year’s panto was revealed in October last year and more than 11,000 tickets have been booked in the last six months.  Beauty and the Beast sees the return of Dame Bella, played by Ray Spencer, who also co-writes and directs the show, and her hapless son Arbuthnot, played by David John Hopper, in a new pantomime based on the popular French fairytale.

Originally written more than 300 years ago, Beauty and the Beast has been retold many times over the years, most recently in last year’s live adaptation by Disney of its 1991 animated classic, starring Emma Watson as Belle. For the first time ever, it now gets the unique The Customs House twist.

Why was the Prince of Peterlee turned into the Beast of Cooksonville by the beautiful enchantress – and how did Arbuthnot end up as a bidet? All will become clear as Dame Bella leads a band of merry players through this well-known story of learning to love the person within.

Ray Spencer, executive director of The Customs House, said: “We’re thrilled so many people enjoyed their last trip to Cooksonville in 2017’s The Lambton Worm so much that they have already booked to return.  Several performances have already sold out, including our Christmas Eve shows, and seats are filling up fast for Christmas week, so get your tickets quick - before the last petal falls!”

Fox and Shriek, who have designed the set and costumes for The Customs House panto for the last 10 years, will be weaving their theatrical magic once again in 2018.  Co-founder Paul Shriek is in the running for Best Costume Design in The Great British Pantomime Awards 2018, which take place on Sunday, April 15.