A bold and exhilarating tale of contemporary Britain

If I Say Jump

With playful comedy and an original soundtrack, Fringe First winner Dick Bonham’s new play tells the story of a Vicar on a morally ambiguous quest for peace in a chaotic time. 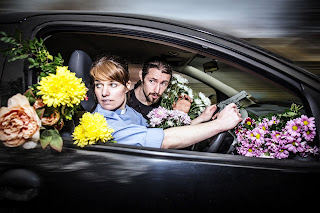 Jenny is a vicar… with problems. Her creepy ex-husband keeps sending her flowers – every day. The church hall is being renovated by a dodgy builder, who’s being investigated by the police. And her best friend Danny has turned up in the vestry with a gun. It’s Sunday morning and she hasn’t been to bed yet.

Danny’s an addict. Nearly a year sober. But he’s still got anger issues. And he’s just had a fight with his best mate Benson. So, when he turns to the church will Jenny be able to do the right thing? And does she even know what that is?

The idea for the story and characters came from director Simon Brewis’s experiences of working with people at Spacious Places addiction recovery centre in Leeds.

He comments “It is a recovery story of sorts, but it isn’t about or substance abuse or hitting rock bottom. It’s about how people can come together when times get crazy and help each other find peace in difficult times. Jenny, the Vicar is sort of a cowboy - always going off like the Lone Ranger to save someone. Her sidekick Danny is trying to help out, but he has problems with controlling his anger - and as a result they end up in a right pickle. I can’t wait for us to get out on the road and share the story with audiences across the country.”

The show is Leeds based theatre company Common Chorus’ first national touring production, following success with community-based productions such as Wind of Change.

If I Say Jump is partly a contemporary Western, that happens to be set in Barnsley, South Yorkshire. Actors Lynsey Jones (Red Ladder Theatre Co, Emmerdale) and Richard Galloway (Buglight Theatre, Cardboard Citizens) weave deftly through a host of lovable but flawed characters, as they explore the unexpected consequences of snap decisions made with the best of intentions. This is a show for anyone who has ever asked themselves “why on earth did I just do that?”

Tickets:
If I Say Jump, comes to Arts Centre Washington on Thursday 19 April. Tickets are from £6 and are available form www.artscentrewashington.co.uk or by calling 0191 561 3455
Posted by North East Theatre Guide at 12:34