The People’s Theatre in Heaton received a real accolade for its redevelopment work last week when Ryder Architecture were awarded Highly Commended for Community Benefit for the scheme in the Royal Institute of Chartered Surveyors North East awards. 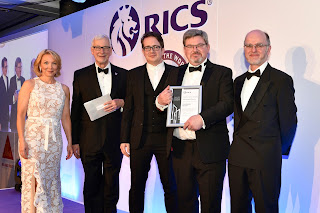 The design has given the front of the building a much needed facelift, transformed the audience experience in the foyer, and built a new fully accessible studio at ground floor level, which will open later this year.

Tony Childs, director of the project for the People’s, said: ‘The changes have already proved a great success for the theatre.  Our new facility has brought new people into the theatre, not only in increased audiences, but also in attracting local people to join our voluntary teams of people who run this place.  When our final push for funding is complete and we finish the studio, the foyer and the studio combined will form a great venue for theatre, workshops, or celebrations for people in the area.’

Gill Adams, freelance fundraiser working on behalf of People's Theatre since 2013 added, ‘Having been born and brought up in Heaton, I'm very proud of the part I've played in working with the volunteers at the People's Theatre to raise the funds for the redevelopment that's making such a tremendous impact.  The achievement so far is due to the generosity of local people who are true lovers of their local theatre and the Trusts and Foundations who, together with Arts Council England, have invested so wisely in the People's Theatre's next 100 years! That said, I appeal to any funders out there that can help us bring in the final £90,000 to put the finishing touches to the new Studio and make the whole project complete.’

The People’s goes from strength to strength, with May proving to be a particularly busy month. Events include JB Priestley’s classic comedy of marital strife WHENWE ARE MARRIED (1st-5th May) and hilarious spy spoof THE 39 STEPS (22nd-26th May).

Audiences also have the chance to tour the building and get a glimpse backstage and in our archives during our TALK AND TOUR on Monday 14th May as part of the Jesmond Festival. Tickets are free but spaces are limited, so booking is required at www.peoplestheatre.co.uk or give the Box Office a ring on 0191 265 5020.
Posted by North East Theatre Guide at 19:05