Theatre That Goes Bang In The Night
Woman In Black
Darlington Civic Theatre
Until 24th January 2015.
Darlington Civic have the perfect cure for the winter blues as a classic horror tale rolls into town.

Seven million people have seen the stage adaptation by Stephen Mallatrat of Susan Hill’s The Woman In Black in a run which includes 25 years in the West End. The escapades of lawyer Arthur Kipp have also been portrayed by Daniel Radcliffe in a 2012 film. Whilst both the play and the play are both based upon the same novella, they differ in their approach. 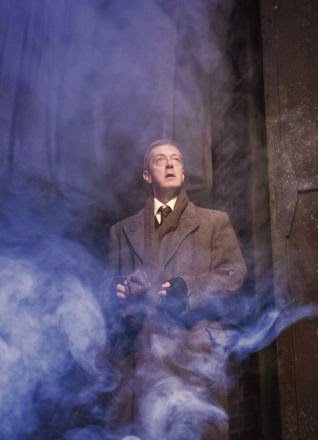 Woman In Black follows the story of Arthur Kipps, a junior solicitor, as he heads to a small town he’d never previously heard of, to attend the funeral of a client, Mrs Alice Drablow. What is ingenious about the play is that it is set in a theatre and Kipps wants to present what happened to his friends and family so he employs an actor to help him sort out the presentation. Many laughs in the first act come through the discussion in how the story should be presented. The handful of props are organised and the story starts to unfold. The Actor plays Kipps in their presentation of his story and Kipps performs the many other characters that he comes across.
Quickly the play hits a groove as Kipps sets off on his journey and he meets many local people who decide to finish the conversation when he points out the purpose of his visit. The ghosts from the past soon start making their presence known.
Malcolm James is immediately engaging, as Arthur Kipps, as he mumbles through the first few lines of the script. Matt Connor is the perfect foil as The Actor who draws the performance out of the shy Kipps.
A combination of clever lighting design by Kevin Sleep and judicious use of sound effects and smoke helps to turn the apparently simple set into a theatrical playground which literally has the audience jumping out of their seats. It just goes to show that you don’t need CGI to produce the special effects.
Great acting, a tight script and fabulous effects produces a gripping night out. The stage show knocks spots off the lacklustre film.
This review was written by Stephen Oliver for Jowheretogo PR (www.jowheretogo.com). Follow Jo on twitter @jowheretogo, Stephen @panic_c_button or like Jowheretogo on Facebook www.facebook.com/Jowheretogo.
On The Web:
Website: http://thewomaninblack.com/home
Twitter: https://twitter.com/Womaninblack_UK
Facebook: www.facebook.com/thewomaninblack
Tickets:
Monday, January 19, 2015 - Saturday, January 24, 2015
Evenings 7.30pm, Matinees Thu 2pm, Sat 2.30pm
Tickets* £17 - £25.50 Discounts available including discounted opening night and Sat 2.30pm Schools £13.50 with 1 free with every 10 booked valid on Mon to Thu performances
To book contact the Box Office on 01325 486 555 or visit www.darlingtoncivic.co.uk
Special Events
Free post show talk Wednesday - Stay behind after the show to take part in a Q&A with some of the cast. Booking not necessary.
Post-show ghost tour Fri 23, tickets £5
Cast:
Malcolm James: Arthur Kipps
Matt Connor: The Actor
Creative Team
Playwright: Stephen Mallatratt
Author: Susan Hill
Director: Robin Herford
Designer: Michael Holt
Lighting Designer : Kevin Sleep
Sound Designer : Gareth Owen
Posted by North East Theatre Guide at 00:23