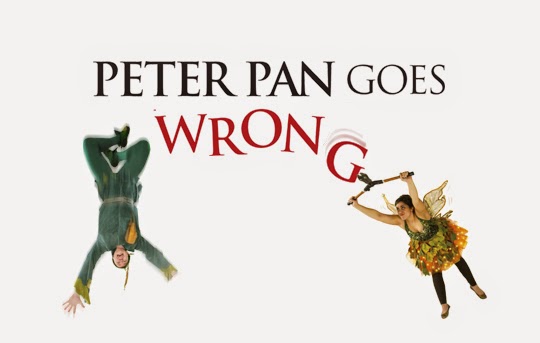 Co-written by Mischief Theatre company members Henry Lewis, Jonathan Sayer and Henry Shields, the play introduces ‘The Cornley Polytechnic Drama Society’ who are attempting to stage J.M. Barrie’s classic tale of Peter Pan, but as the title suggests, everything that can go wrong… does, as the accident prone thesps embark on a thrilling adventure to Neverland with hilariously disastrous results. A highly physical comedy packed with finely-tuned mayhem and Buster Keaton inspired slapstick, Peter Pan Goes Wrong delivers a fast-paced show with split-second timing and ambitious daring.

Mischief Theatre exploded onto the Darlington Civic Theatre stage with phenomenal success last year with The Play That Goes Wrong. Kenny Wax - triple Olivier award-winning producer of the play said: “We took a huge gamble in transferring The Play That Goes Wrong into the West End; a new comedy starring 'no one famous' by unknown writers.

And yet our sold out show is delighting packed houses night after night. I have no doubt that Peter Pan Goes Wrong will be met with the same tremendous reaction.” The Play That Goes Wrong was the Jowheretogo Comedy Play of 2014: hereand you can read its review: here
A donation from every ticket sold for Peter Pan Goes Wrong is given to Great Ormond Street Hospital.

Tickets:
Peter Pan Goes Wrong runs at Darlington Civic Theatre from Tuesday February 3 to Sunday February 8. Tickets* are priced from £17.
To book contact the Box Office on 01325 486 555 or visit www.darlingtoncivic.co.uk
*Includes a £1 restoration levy
Special Events
Free post show talk Wednesday - Stay behind after the show to take part in a Q&A with some of the cast. Booking not necessary.