Review: How Did I Get To This Point? at Newcastle Live Theatre


Where Do They Get
Their Sleeping Bags From? 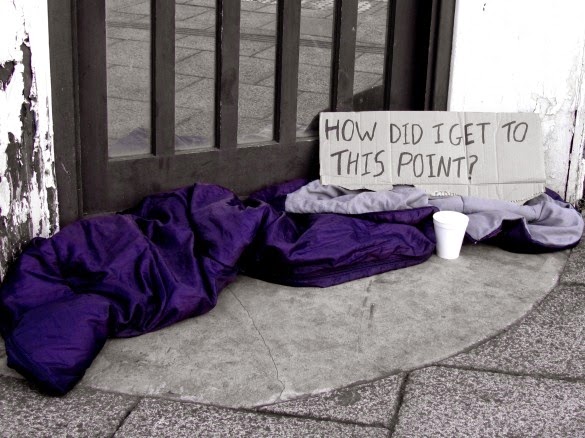 How Did I Get To This Point?
Newcastle Live Theatre
19th, 24th & 25th September 2014
Live Theatre currently has two productions to prick ones conscience: Wet House on the main stage and Alphabetti Theatre’s How did I get to this point? in the intimate studio theatre.  The Rowntree Foundation have stated that most us of are just two pay checks from homelessness and yet we may be guilty of not giving the matter a second thought.

As the audience enter they are asked to answer a question about homelessness such as Where do they get their sleeping bags from?The studio is set up in the round and sat in centre stage Amy Foley and Ali Pritchard were ready to spring into action.  The production features audience and public reaction to issues of homelessness coupled with the tales from interviews with those affected. The addition of comments made in incident books adds the closest thing to light relief.
The actors do a great job of drawing the audience in to question their own belief structure. By the time Pip Chamberlin crashes into view with his hammer one has to consider the fine line between keeping that roof over ones head and losing it.

This is a production that creates more questions than answers.  An unsentimental journey which probes our values as a society – should we do more? Under Ben Dickenson’s direction Alphabetti have delivered a timely reminder of the need for society.

Brilliant, moving, thought provoking, unsettling & sympathetic – this should be compulsory viewing for the Daily Mail reader.