“The only difference is that
we have the keys…” 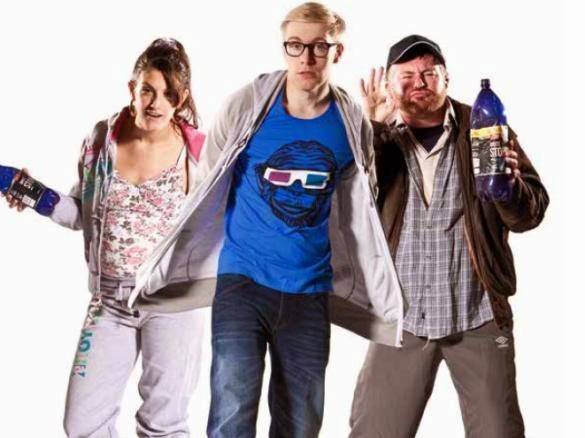 Wet House
Newcastle Live Theatre
Until 11 October
Paddy Campbell’s first play was deservedly awarded three 2013 Journal Culture Awards and was given the status of one of the Guardian’s top ten plays of the year. We loved it at Jowheretogo but how will the latest run match up to the original?

Andy is a fresh graduate who decides to put his 2:2 in Art History to good use in the care industry. He ends up working in a Wet House – a place for the homeless that allows the residents to drink on the premises. Providing the care for societies’ forgotten people proves to be a challenge but Andy also has to deal with the staff who work there. The other key workers, Helen and Mike, have their history and their problems as they deal with drunks like Dinger, the heavily pregnant Kerry and new arrival Spencer.

Director Max Roberts has recognised the need to entertain and keep the light hearted moments in the mix. Add in a healthy amount of disturbing situations and it leaves the audience feeling like a ride on the old cork-screw.  This is a fabulous play to experience in the intimate surroundings of the Live Theatre.

The cast is terrific, Riley Jones plays the new member of staff well without being too wet and Eva Quinn is vibrant as the vulnerable Kerry. The one new comer to the cast is Simon Roberts who added a new dimension to the role of Spencer. Jackie Lye, as Helen and Chris Connel, as Mike, quickly draw the audience into their character’s complex issues.

Once again it is Joe Caffrey who is phenomenal as the hopeless drunk Dinger in memorable moments such as trying to avoid a bath or singing the hits of Petula Clarke.  Dinger is one character that will make you laugh and cry in equal measure.

Wet House is a powerful drama with an awesome cast.

This review was written by Stephen Oliver for Jowheretogo PR (www.jowheretogo.com). Follow Jo on twitter @jowheretogo, Stephen @panic_c_button or like Jowheretogo on Facebook www.facebook.com/Jowheretogo
There will also be a discussion on Sunday 5th October on Homelessness & Addiction:  Discussion with writer Paddy Campbell and a chance meet the team behind the show on Tuesday 7th October.
The production will tour to Hull Truck (14-18 October) and Soho Theatre, London (22 October – 16 November)
Ticket Details:
Wednesday 17 September to Saturday 11 October
LOCATION: Main Theatre
SUITABILITY: 14+, contains strong language, scenes of violence and adult themes
TICKETS: £22-£10, over 60s concs £22-£10, other concs £15-£5
DURATION: Approx. 2 hours and 30 minutes including an interval
www.live.org.uk
Hull Truck:www.hulltruck.co.uk
Soho Theatre: www.sohotheatre.com/whats-on/wet-house
Posted by North East Theatre Guide at 00:43