Preview: The Soaking of Vera Shrimp at Newcastle Live Theatre

The Soaking of Vera Shrimp
Newcastle Live Theatre
Wednesday 15 to Saturday 18 October, 8pm
Audiences at Live Theatre this October audiences can catch Alison Carr’s The Soaking of Vera Shrimp which won a development bursary from Live Theatre and The Empty Space at the Bursary Scratch Night in December 2013. This playful and poignant solo show follows previous bursary winner Alistair McDowall who won the bursary in 2012 to develop his critically acclaimed show Captain Amazing.
As Gez Casey, Live Theatre’s literary manager explains: “As well as providing audiences with the opportunity to see new work and the chance to influence the creative process, Live Lab events in our Studio Theatre space are part of Live Theatre’s extensive talent development programme. Our recent Edinburgh Fringe hit Captain Amazing emerged through Live Theatre and The Empty Space’s Bursary scheme and we’re delighted to be showing our 40th birthday winning production The Soaking of Vera Shrimp in October.”
This heartfelt one woman show about grief, love and never giving up will be performed from Wednesday 15 to Saturday 18 October at 8pm. Performer Tessa Parr steps onto the stage to tell the story of fourteen year-old Vera Shrimp who discovers that she has an extraordinary ability – she can ‘read’ raindrops, each one having soaked up an emotion from those their water has come into contact with. And amongst all of the hundreds of millions of raindrops falling from the sky, Vera starts the search for the one that holds what she is desperate to find.
Directed by Rosie Kellagher, this is the first full production of the show described by an audience member at the work-in-development showing as “compelling, evocative and poetic”.
The writer, Alison Carr, said:   “We were delighted to win the Bursary Award and are really excited to bring this brand new Vera Shrimp to audiences. The show has been through different incarnations but the Bursary has helped give us the time and space to find the right way to tell it, putting Vera herself centre stage and allowing her to tell her fantastic, funny and heartbreaking story in her own unique way."
The Soaking of Vera Shrimp is Tessa Parr’s Live Theatre debut. Tessa has performed with a variety of theatre companies including, most recently, with Greyscale in their Edinburgh Festival Fringe show Dead to Me. Tessa’s other theatre credits include Alice in Bed with north east based theatre company Tender Buttons and The Last of the Lake by Rough Fiction. 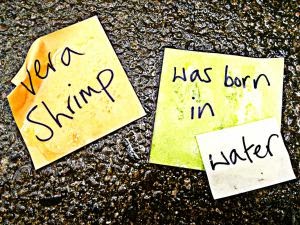