Preview: The Rise & Fall of a Northern Star at Sunderland's Independent


First theatre production for Sunderland's Independent
The Rise & Fall of a Northern Star
Sunderland's Independent
Friday 15th May 2015
On Saturday 18th April, musician, actor, writer, Stella Grundy kicked-off the Spring tour for her multimedia music production, The Rise & Fall of a Northern Star. This unique and incendiary show, which was directed by Ian Bloomfield, blends comedy and tragedy in rhythmic, pacey dialogue, interspersed with Stella's original music.  The story is a cautionary tale of rock n roll wannabe, Tracy Startrying to make her mark in the male-dominated Manchester music scene of the eighties and early nineties.

This tour incorporates specific theatres and music venues which suit The Rise & Fall of a Northern Star's cross-over production style ~ the next date lined up is The Independentin Sunderland on Friday 15th May. It's the first time a theatre production has taken place at this venue. 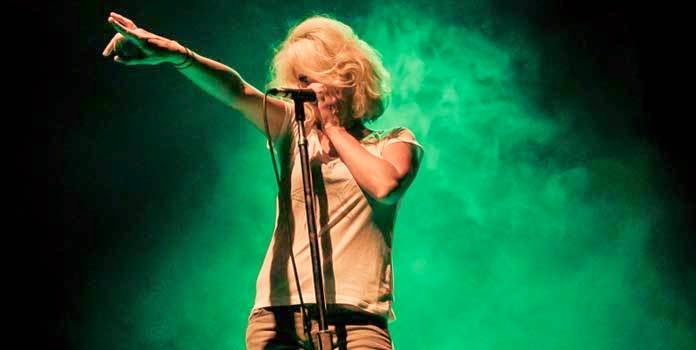 The original script from The Rise and Fall of a Northern Star was developed around nine songs that Stella composed specifically for the piece. These tracks will be released as part of a concept album, to complement the touring show. Recorded recently at Gadget's Lab Studios, Manchester, it was produced by Stella herself along with Jonathan Hurst and features legendary bassist, Jah Wobble. (The album is available on request).

As part of the multi-media touring production of The Rise and Fall of a Northern Star, Stella has created a 'mockumentary', Then and Now, which is shown on the screen as an integral part of the play. Then and Now features various 'talking heads', including Clint Boon and Mike Joyce, who form part of Tracy Star's narrative by providing humorous anecdotes about Tracy's 'historical moments' from her musical past.  This works brilliantly as part of the audience's experience and enables them to form an emotional connection with Tracy as a fully-rounded and believable character from the Madchester era.
Tickets:
Tickets can be obtained from the following website: http://www.artscentrewashington.co.uk/production-details.aspx?id=650or call 0191 219 3455
The Tour
The Rise and Fall of a Northern Star Tour Dates:
(supported by The Arts Council)

Breaking News is the new EP from North East band Peculiar Disco Moves. The new video is a portrayal of celebrity life, where red tops will sell their Granny to get a picture of a Z-lister parking his car one minute, then drop him or her like an anchor in the sea the next.
See the new PDM video on this link here
Follow Peculiar Disco Moves here


Click on this link for more details about Be My Enemy / Alterred at The Cluny
Posted by North East Theatre Guide at 21:10