Preview: The Play That Goes Wrong at Newcastle Theatre Royal

THE ORIGINAL CAST OF

THE PLAY THAT GOES WRONG REUNITE

HAVING BEEN 'RESTING' FOR 7 YEARS, THEY ARE LIKELY TO BE WORSE THAN EVER!

The Play That Goes Wrong 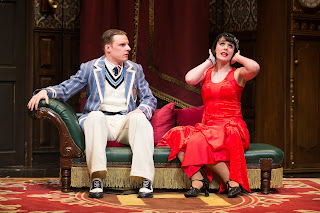 The original cast of The Play That Goes Wrong are reprising their roles in two UK cities as part of the production’s current UK tour, 10 years after they first performed the play at The Old Red Lion Pub Theatre.

Having proved a huge audience favourite during previous riotous runs in 2017 and 2018, The Play That Goes Wrong is a highly physical comedy packed with finely-tuned farce and Buster Keaton inspired slapstick delivered with split-second timing and ambitious daring.

The play features the (fictional) Cornley Drama Society who are putting on a 1920s murder mystery, but as the title suggests, everything that can go wrong… does! As the accident prone thesps battle against all the odds to reach their final curtain call, hilarious results ensue!

Jonathan Sayer said: “We’re so excited to be going back into The Play That Goes Wrong. It’s such a special show for us all and we really can’t wait to perform again and make people laugh in two amazing cities!”

Awarded the 2014 WhatsOnStage Award for Best New Comedy, the 2015 Olivier Award for Best New Comedy and a Tony Award for the Broadway transfer, The Play That Goes Wrong continues to delight audiences in the West End, Off Broadway and around the world. The show’s success is a testament to the hard work and determination of a group of drama school graduates who became friends, set up a company under the name ‘Mischief’ and created an extraordinary body of work. The Play That Goes Wrong shows no signs of slowing down since its first performance at The Old Red Lion in 2012 with only four paying customers. Since then, it has played to an audience of over two million and now has productions in over 30 countries.

The Play That Goes Wrong is co-written by Mischief company members Henry Lewis, Jonathan Sayer and Henry Shields and is directed by Mark Bell, with set designs by Nigel Hook, costumes by Roberto Surace, lighting by Ric Mountjoy, original music by Rob Falconer, sound design by Andy Johnson, the associate director is Sean Turner and the resident director is Amy Milburn. The Play That Goes Wrong is produced in the West End by Kenny Wax Ltd and Stage Presence Ltd.