Joseph And The Amazing Technicolor Dreamcoat 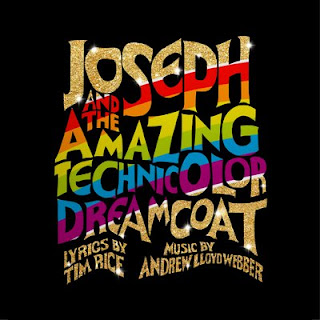 Joseph is back on Tyneside, but not how you remember it. Producer Michael Harrison and his team have given the show a thorough revamp. The songs are all still there but the new direction, set design, choreography and lighting combine to give a much more engaging and lively show. Add into the mix the very talented leads of Linzi Hateley, Jason Donovan and Jac Yarrow and a brilliant ensemble and you possibly have one of the best productions of Joseph to date.

Before the show there was already a youthful buzz amongst the packed audience. There is something about this show which makes it an attractive bridge between early experiences of theatre (panto) and more mature shows for the younger members of the audience. Gareth Owen’s sound design is not too loud for young ears either. This is going to be a big hit over the forthcoming half term. 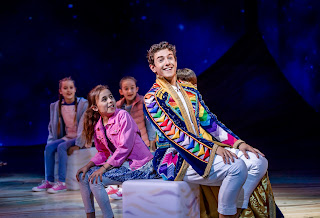 The shows begins with narrator Linzi Hateley gathering a group of young cast members around a camp fire. Not for this production a large static staircase with a largely stationary young choir. The full cast frequently find themselves in intricate movement around the stage. This choreography has more in common with recent musical hits like School of Rock rather than the original choral piece.

Joseph is performed by Jac Yarrow, who successfully filled the shoes of one of musical theatre’s popular roles. Here is one of the other changes with the show: I feel that there is more breaking of the fourth wall, from the shrug of young cast member dragging the sheep across the stage through to Linzi encouraging a reaction from the audience. This leads to a more personable show and makes the comedy feel more natural and less enforced upon the audience.

Jac’s costume represents a departure from designer Morgan Large from some of the set pieces of previous recent shows - but there’s going to be no spoilers here.

I don’t recall having the orchestra in the pit either. Musical Director John Rigby is occasionally picked out by Ben Cracknell’s lighting design and it is clear that the musicians are also viewing this a fun show.  The musicians did not put a foot wrong all night and they helped maintain the energy of the show. 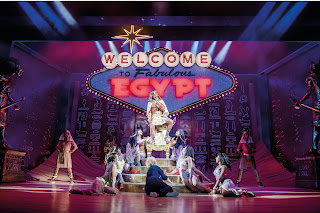 Act 2 brings on Jason Donovan as the Pharaoh. Jason is a natural in the live situation and the performance is enhanced by the three ringed circus  that develops.

Joseph runs for about two hours, including interval, and is sung through. That is: the entire show is made up of songs with no unsung spoken parts. In order for this to work it needs good singers. Linzi has a very good voice, Jac impressed us with his interpretation of the songs and Jason is a star act. On top of this there is good acting and movement around the stage.

Linzi is probably the most personable narrator that we have seen in the role. Jac is clearly one to watch as his career develops and Jason will always get a warm welcome over here. The ensemble is also great to watch. From the experienced adult dancers through to the younger performers - this is a very impressive group. 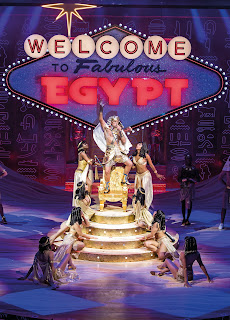 So despite seeing Joseph a number of times, I felt that this show offered something new. It had a refreshing energy. It was a funny show too. There is life in this production that has origins that date back to 1968.

Tickets are available from the theatre box office and online from https://www.theatreroyal.co.uk/whats-on/joseph/