The Customs House Academy, launched to mark the 150th anniversary of the building’s opening, recognises and honours the achievements of exceptional individuals who have made a major contribution to the world of arts and entertainment and have a significant connection with South Tyneside. 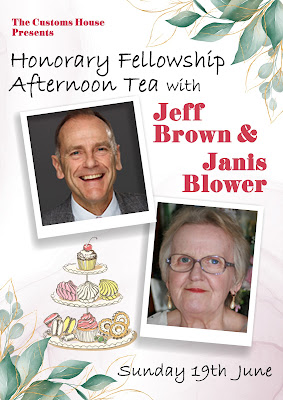 On Sunday, 19th June, The Customs House Academy will welcome Janis Blower and Jeff Brown  to become Honorary Fellows. Janis is an author and journalist, whose contribution  to the Shields Gazette over 40 years won many awards; her Cookson Country collection can be found in expat homes around the world. Jeff who after a career in journalism, joined the sports team at Tyne Tees TV before moving to BBC Look North as sports presenter, before becoming the regular anchor for the show; his play ‘Cornered’ tells the story of David Corner and the aftermath of the “Friendly” league cup final. The afternoon will be hosted by the Voice of North East News, Stephanie Finnon from BBC Radio Newcastle.

Ray Spencer, Executive Director explained: “Jeff & Janis are both Legends in their own fields and have that rare gift in modern journalism that they are loved and trusted by the communities they serve”