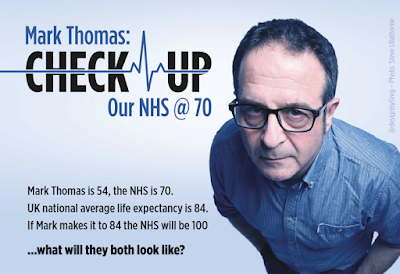 Mark Thomas is a comedian with a mission. Not satisfied with making audiences laugh, he is determined to celebrate one of our national institutions. His passion is palpable, his message is clear. In a one man show, he sings the praises of the organisation responsible for keeping us alive, and free from fear, the NHS.

The second paragraph of a review like this is usually a disclaimer, isn’t it? Yes, we have seen Mark a number of times and we loved his Channel 4 programmes back in the day. No, we don’t buy Coca Cola and yes, the sludge at the bottom of our bin now has a name. Politically, Mark’s core values align with our own. When Mark pointed out that clapping after one of his remarks about a member of ‘The Independent Group’ shows there were socialists in the room - we were amongst the ones clapping. I don’t know how you’d view this show if you are a passionate right winger.  But that’s not the point. This is my writing. These are my thoughts. Let’s move on…

Mark is a raconteur. A man who can speak quickly and passionately about a range of topics. Each show he does is unique and clearly comes from the heart. This is not a man who believes in recycling material. 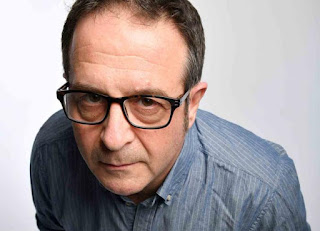 The show starts with the original public information film that was shown in cinemas to spread the word about the launch of the National Health Service in 1948.  Mark’s opening comments are that he has relatives that remember the launch, others that worked in the NHS and indeed, like many in the room, he has the NHS to thank for his own safe birth. Mrs Brown’s Boys may not be everyone’s cup of tea, but a regular occurrence on the programme is the scramble to find the money to pay for a doctor. In the UK we don’t have that issue as the NHS is universal, paid for through taxation so is free at the point of use and covers us for every medical eventuality. It continues to be something to be proud of.

In writing the show, Mark has interviewed a number of leading people in the NHS and some politicians who have been in charge of the nation’s health. He shadowed several NHS staff in a variety of roles from running an A&E resus department, working in a renal facility, nursing in a dementia unit through to the key role of a local GP. He also discusses with a GP what could possibly go wrong with his health in his remaining years.

The show ties up his research with numerous facts. Mark takes on the role of many of the doctors and health professionals, usually when sat down. The use of a projections and lighting mean it is obvious when he is quoting a particular individual. It is rare that the back projection turns into actual video footage, but that gives such footage much more impact. A great example of this is when the former Labour health minister reveals his biggest regret.

Now don’t get me wrong. Not everyone in the audience agreed with everything said, but everyone had food for thought. How much are we willing to pay for our health service? Can we afford it? Where is the money going? What is a sense of duty? The biggest surprise was that Hunt and May didn’t get a bigger mention.

Mark’s natural ability to tell a great story and hold an audience’s attention coupled with the relevance of the topic to every member of the audience make Check-Up - Our NHS @ 70 a must-see show.

Tickets:
The dates at Newcastle's Live Theatre have sold out.
Mark Thomas also brings the show to the ARC in Stockton on Tuesday 12th March: http://arconline.co.uk/whats-on/special-events-comedy/mark-thomas-check-up-our-nhs-at-70.