Preview: Oh No It Isn’t at South Shields Customs House

LKT Productions were nominated for two prestigious Off West End Awards for their recent London production of Th’Importance of Bein’ Earnest that saw the Oscar Wilde classic relocated to a Yorkshire Council estate with hilarious results. They are now delighted to be visiting Customs House as they take their critically acclaimed production Oh No It Isn’t! on tour.

They’re the best of sisters onstage but the worst of friends off it. 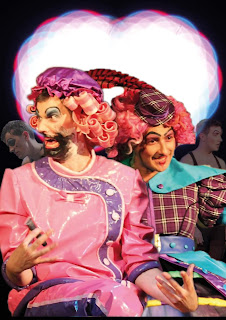 It’s the final performance of Cinderella in a moth-eaten, regional theatre and backstage tensions threaten to boil over onstage.  Will the egotism, oneupmanship and sexual politics remain confined to the dressing room?  Will the ugly sisters keep the professional professional and the personal personal?  Will we ever find out what happened during Babes In The Wood?

Oh No It Isn’t! is written by and stars Great British Pantomime Award nominee Luke Adamson. His new play is a reflection on his 20 years in the theatre, how the business has changed and the challenges that actors and theatres face in the 21st century.   The hilarious and moving new play combines scenes and routines from pantomime with the backstage dramas of the two actors playing the ugly sisters in Cinderella. Adamson says “a lot of the anecdotes and stories featured in the show have actually happened to, or been retold to me while working in theatre. Some are genuinely unbelievable but very true. Pantomime is probably the single most popular show in a theatre’s calendar and Oh No It Isn’t provides a chance for the audience to enjoy some of their favourite scenes from panto outside of the festive season, but also a unique opportunity to see behind the curtain and appreciate the hard work, the sacrifices and the real lows that can affect those involved in creating their Christmas treat.”

Luke is delighted to be returning to Customs House after his critically acclaimed Alzheimer’s play One Last Waltz played there in 2015: “Customs House is a brilliant venue that does brilliant work for its community, we thoroughly enjoyed our visit in 2015 and I can’t wait to come back. I’m also very excited to be playing at a venue that has such a renowned pantomime! The style and quality of the Customs House panto is revered all over pantoland.”

This show is not suitable for children