A murder mystery set on a model train is calling into The Customs House on a whistle-stop tour of the UK. 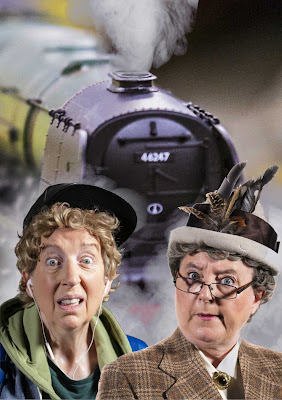 Strangers on a Train Set is the latest production from LipService Theatre, which has been creating original comedies from a distinctly female perspective since 1985, picking up a number of awards along the way.

Challenging a youth to turn down his music, Irene Sparrow, inventor of the left-handed crochet hook finds herself under suspicion of murder after the train emerges from a tunnel with the young man dead.

But this is no ordinary train, each passenger is reading a book and each book is a portal into a parallel universe of train-related crime fiction, referencing the likes of Brief Encounter and Murder on the 4.50 from Paddington.

With clever use of projection and train sets, LipService give you a whistle stop tour that will leave you breathless and racing for the refreshment coach.

Ray Spencer, Executive Director of The Customs House, said: “LipService always bring a fresh take on stories we all know. They are funny and clever storytellers and bring great productions to the stage.”

LipService’s Maggie Fox and Sue Ryding specialise in literary spoofs and have been described as ‘the Laurel and Hardy of literary deconstruction’ (The Guardian).

Strangers on a Train Set is their 21st show, with previous productions including The Picture of Doreen Gray, Inspector Norse, Withering Looks, Very Little Women, Jane Bond, Move Over Moriarty and Mr Darcy Loses the Plot.  As well as their work on stage, they had their own series on Radio 4 – nominated for a Writer’s Guild Award – and have twice won the Critics Award for Comedy at the Edinburgh Fringe Festival.

Strangers on a Train Set is directed by Lawrence Till, whose TV credits include Shameless, Mr Selfridge, Love and Marriage and The Young Offenders. Michael Holt (The Woman in Black) is the designer and Oliver Vibrans the composer.